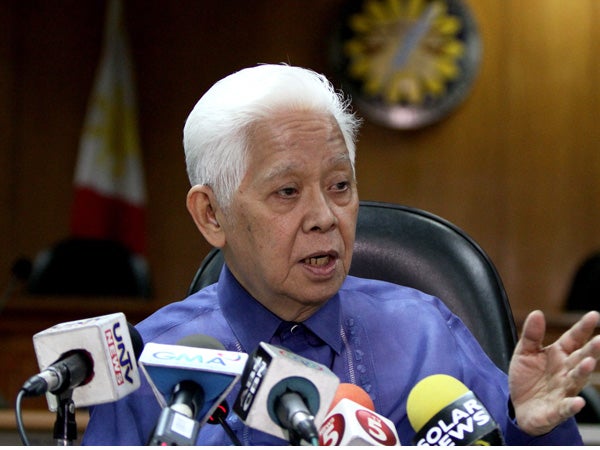 A FORMER chair of the Commission on Elections (Comelec) on Sunday said the poll body’s decision to grant the request of the Liberal Party and its standard-bearer Mar Roxas for an extension of the deadline to submit their campaign expense report sets a “bad precedent” for succeeding elections.

Former Comelec Chair Sixto Brillantes Jr. warned the poll body would be swamped with requests for extensions for the filing of the statement of contributions and expenditures (SOCE) in the next election, with candidates and political parties invoking the petition granted to Roxas and the LP.

“Now who is going to believe in the deadline the Comelec will set in the succeeding elections? Nobody. They will think they can simply ask for an extension,” Brillantes told reporters.

Roxas missed the June 8 deadline to submit his SOCE. Days later, he and the LP asked the Comelec for a 14-day extension, or until June 30.

The LP submitted its SOCE on June 14 but the documents did not include Roxas’ campaign expense report.

On Thursday, the Comelec voted 4-3 in favor of an extension for Roxas and the LP despite opposition from Commissioner Christian Robert Lim, head of the poll body’s campaign finance office which is in charge of receiving and evaluating the SOCEs of all candidates.

Lim eventually turned in his resignation.

It’s been done before

Extending the deadline to submit the campaign expense reports had been done before, according to Comelec spokesperson James Jimenez.

Jimenez noted that the poll body, then under Brillantes, extended the reporting deadline following the 2013 elections.

The Synchronized National and Local Elections Act of 1991 states that all candidates and political parties should file their respective campaign expense reports 30 days after Election Day.

Brillantes countered that while the Comelec extended the filing of the SOCE in the 2013 election, it still enforced the imposition of penalties on the candidates and political parties that filed beyond the original deadline.

“In their decision now, they did not impose any penalty on late filers. It’s like they forgave the late filers altogether,” said the former elections chief.

Comelec Chair Andres Bautista had voted against extending the deadline, saying late filing may be allowed but penalties should be enforced.