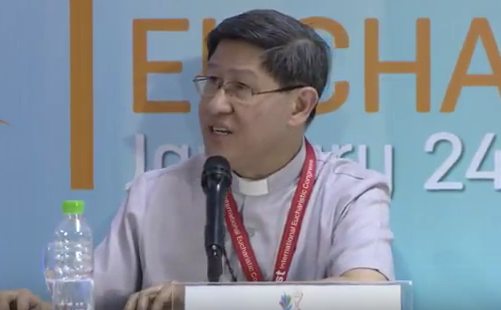 THE ARCHDIOCESE of Manila has issued an “Oratio Imperata,” or obligatory prayer, to be recited for nine days before the  newly elected officials of the country take the reins of office on June 30.

Manila Archbishop Luis Antonio Cardinal Tagle requested the mandatory prayer by the faithful upon the proposal of the Catholic Bishops Conference of the Philippines, said Fr. Reginald Malicdem, the Manila Archdiocese’s chancellor, in a circular dated June 14.

Malicdem said the special prayer shall be recited beginning June 21 until the eve of the assumption to office of all new public officials throughout the country. It shall be prayed during the Prayer of the Faithful at all the Masses in the Manila Archdiocese starting Tuesday.

The Oratio Imperata, a powerful mandated prayer, is an old Catholic tradition where the bishop or priest leads the community in prayer during Mass for a special intention besides the ones prescribed by ritual. It is recited while kneeling.

There are different types of Oratio Imperata, which may be prayed either in times of civil disturbance or for deliverance from calamities or illness.

The  prayer dedicated to government officials asks that they be blessed with “true love for the poor and godly humility” and with “sincere generosity and a courageous simplicity of lifestyle.”

It cites Pope Francis, who has said that politics “is one of the highest forms of charity.”

Against culture of death

It also asks God that those in positions of authority would live “peaceful and quiet lives, godly and dignified in every way” and have genuine respect for life and an unyielding opposition to the culture of death.

The prayer expresses hope for the attainment of prosperity and progress; for assurance of peace and harmony; the preservation of justice and freedom, and the nation’s healing and protection from harm under the leadership of the newly elected officials.

All incoming officials will assume their posts at noon of June 30.  President-elect Rodrigo Duterte will have his inauguration in Malacañang, while Vice President-elect Leni Robredo at the so-called Boracay Mansion in New Manila, Quezon City.