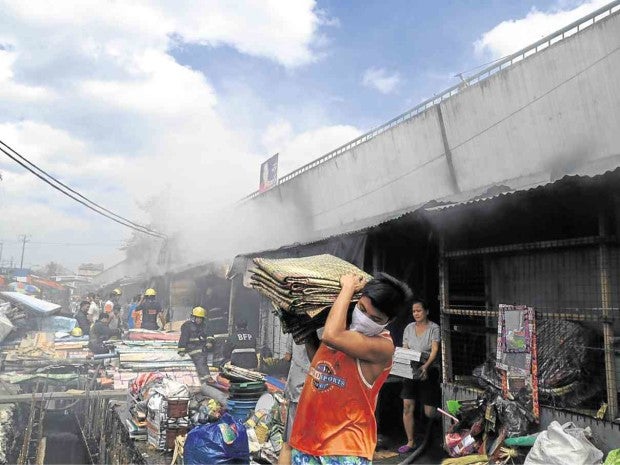 VENDORS save their goods from the burning interior of the public market in Barangay Tanyong Malabon City, on Saturday. Ritzchelle Belenzo

A FIRE raged for about 17 hours and damaged a section of the public market in Barangay Tanyong, Malabon City.

Authorities said the fire started around midnight on Friday and was declared out at 5:43 p.m on Saturday.
Damage was initially estimated at P1 million. There were no reported injuries.

Senior Insp. Noe Ragaes of the Malabon fire department said the fire reached the fourth alarm and affected more than 200 stalls in the market’s grocery and general merchandise sections.

It reportedly started at a cell-phone accessories store, but the exact cause of the fire remained under investigation.

The flames spread quickly as it engulfed stacks of dry goods and plastic materials inside the stores.

The fire affected about one-fourth of the market area, which remained without power supply at press time. But a number of stalls in unaffected areas, particularly along the outer sections, were able to resume business on Saturday. Ritzchelle Belenzo