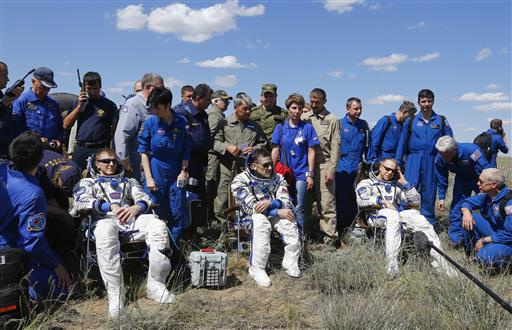 The International Space Station crew, from left, Britain’s Tim Peake, Russia’s Yuri Malenchenko and Tim Kopra of US, surrounded by ground personnel, rest shortly after landing near the town of Dzhezkazgan, Kazakhstan, Saturday, June 18, 2016. A three-person crew from the International Space Station has landed safely in the sun-drenched steppes of Kazakhstan. (Shamil Zhumatov/Pool Photo via AP)

MOSCOW — An International Space Station crew including an American, a Briton and a Russian landed safely Saturday in the sun-drenched steppes of Kazakhstan.

All descent maneuvers were performed without any hitches and the crew reported feeling fine as their ship slid off the orbit and headed down to Earth. Helicopters carrying recovery teams were circling the area as the capsule was descending slowly under a massive orange-and-white parachute.

Support crew helped the trio get out of the capsule, charred by a fiery descent through the atmosphere, and placed them in reclining chairs for a quick check-up.

Squinting at the sun, Peake said he felt “elated,” adding that “the smells of Earth are just so strong.”

“I’d love some cool rain right now!” he said with a smile as he sat in scorching heat in his balky spacesuit.

After a medical check-up, the crew will change their spacesuits for regular clothing and be flown separately to their respective bases.

He was not the first Briton in space. Helen Sharman visited Russia’s Mir space station in 1991 on a privately backed mission and several British-born American citizens flew with NASA’s space shuttle program.

But Peake is Britain’s first publicly funded British astronaut and the first Briton to visit the International Space Station. He performed the first British space walk and was honored by Queen Elizabeth II in her annual Birthday Honors List.

He excited many at home by joining the 42-kilometer London Marathon — from 400 kilometers above the Earth, harnessed to a treadmill aboard the ISS with a simulation of the route through London’s streets playing on an iPad.

Peake finished the race in 3 hours and 35 minutes, a record for the fastest marathon in orbit, according to Guinness World Records.

The trio spent 186 days in space since their launch in December 2015. They have conducted hundreds of experiments in biology, biotechnology, physical science and Earth science.

For Malenchenko, it was a sixth mission, and he logged up a total of 828 days in space, the second-longest accumulated time in space after Russian Gennady Padalka. Kopra has logged up 244 days in space on two flights.

NASA astronaut Jeff Williams along with Russians Oleg Skripochka and Alexey Ovchinin of Roscosmos will operate the station for three weeks until the arrival of three new crew members.

2 spacemen come home after a year aloft: ‘We did it!’