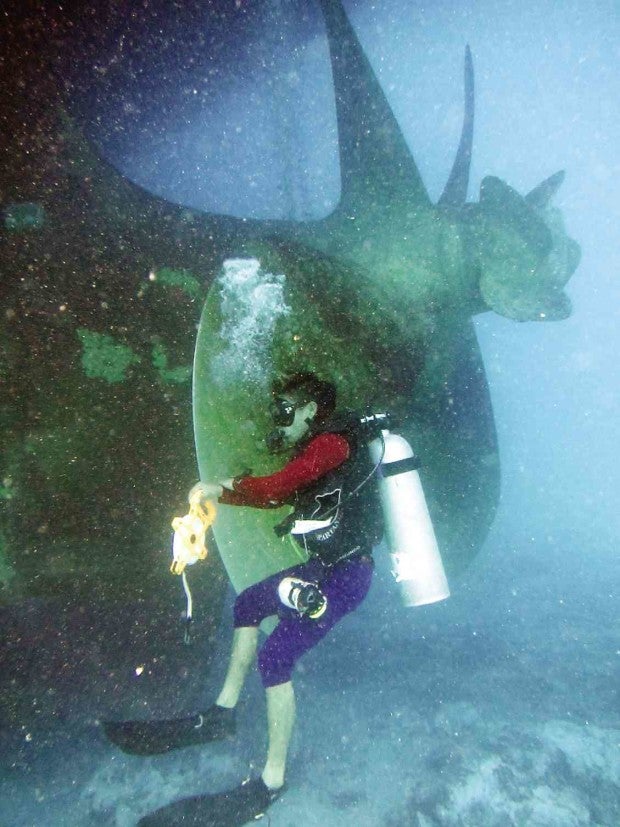 A DIVER inspects the damage caused by the cargo ship MV Belle Rose that ran aground in Monad Shoal, a popular dive spot off the town of Daanbantayan in Cebu province. CONTRIBUTED PHOTO

CEBU CITY—Three tugboats were used to pull back a Panamanian-registered cargo vessel that ran aground on the shoal off Malapascua Island in Daanbantayan town, in northern Cebu.

Two tugboats were at the back portion of  MV Belle Rose while another was at the forward section to maintain balance.

The operation to pull the boat to deeper waters started at 9 a.m. when the tide was at 1.6 meters but it temporarily stopped at 10:30 a.m. to allow the crew to discharge water from the vessel.

“There is a need to discharge 500 tons of water for a 10 centimeter rise,” said Noel Kimmayong, marine superintendent from Malayan Towage and Salvaging Corp., which conducted the salvaging operation.

A blue portable hose was used to discharge water from the vessel because the ballast pump malfunctioned, he said.

Kimmayong, who held a news conference on board a banca on Saturday morning while supervising the operation, said he could not confirm the exact distance of the movement of the ship as of 11 a.m.

Environment and local officials decided to slowly pull back the vessel and bring it to a portion of the sea where the depth was at 14 meters to prevent further damage on the coral reefs at the Monad Shoal, a known diving report off Malapascua Island, which is part of Daanbantayan town in northern Cebu.

At least three hectares of coral reefs were damaged when the 29,100-ton vessel loaded with 48,000 metric tons of clinker, a raw material used for the production of cement, ran aground while heading to San Fernando town in southern Cebu from Japan. CDG