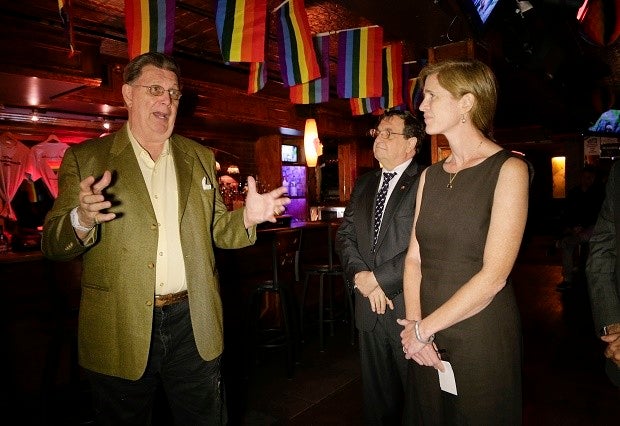 Stonewall Inn bartender Fredd Tree, left, talks about the bar’s famous history in the gay rights movement as United States U.N. Ambassador Samantha Power, right, listens, Thursday, June 16, 2016, in New York. In the wake of the Orlando shooting, Power convened at the Stonewall Inn an informal meeting of the United Nations’ LGBT Core Group, a collection of Ambassadors from member states concerned with promoting and enshrining LGBT rights at the United Nations and across the globe. AP

NEW YORK — US Ambassador Samantha Power and UN envoys from 16 other countries visited the Stonewall Inn which helped spark the modern gay rights movement and vowed to step up their fight for the rights of lesbians, gays, bisexual and transgender people around the world.

Power stood in the darkly lit gay bar that was the scene of a 1969 police raid that set off riots which emboldened gay activists nationwide and said that being LGBT is not only criminalized in many countries but some impose the death penalty if “you’re a man loving a man, you’re a woman loving a woman.”

“Vigilante violence that is not contested by the state is something that is extremely prevalent,” she added. “We have seen it in so many parts of the world.”

Power said she brought the so-called Core Group of ambassadors who support LGBT rights from UN headquarters to the Greenwich Village bar because there wasn’t a more symbolic place to go to after “the monstrous attacks” at a gay bar in Orlando that killed 49 people.

“Unfortunately we see that worldwide the rights of LGBT people are under pressure, and we need worldwide global action to address this, and the Core Group will be instrumental in doing that,” he said.

Argentina’s UN Ambassador Martin Garcia Moritan said his country is part of a group of LGBT supports that introduced a draft resolution Thursday at the UN Human Rights Council in Geneva on discrimination and violence against sexual orientation. Chile’s UN Ambassador Cristian Barros Melet said the group wants the council to appoint a UN expert to focus on LGBT rights.

READ: US calls on UN members to protect LGBT people from attack

Last year’s first-ever Security Council meeting on gay rights put a spotlight on the persecution of LGBT people by the Islamic State extremist group and its killing of at least 30 people for sodomy.

The UN has worked to improve the rights of the LGBT community in recent years but has repeatedly run into opposition from some member states — especially from some countries in the Middle East and Africa as well as China and Russia.

A General Assembly resolution calls on member states to protect the lives of all people and investigate killings. But US deputy ambassador David Pressman said after the Orlando shootings that “every time it is up for consideration, there is a pitched fight” over whether it is appropriate to include sexual orientation and gender identity in its language.

Earlier this month, two dozen civil society organizations that provide services for LGBT communities and others were banned from a high-level three-day General Assembly meeting on AIDS. Under UN rules, any UN member country can veto the participation of any non-governmental organization without providing a reason.

Ivan Simonovic, the UN assistant secretary-general for human rights who joined the envoys along with a European Union diplomat, said he came “to show solidarity with LGBT persons all over the world who are the object of harassment, sometimes by governments and police, but sometimes by individuals such as the recent US attack.”

He said major steps have been taken recently in some countries and the bodies that oversee UN human rights treaties have reaffirmed that LGBT people are not to be subjected to either discrimination or violence.

The Netherlands’ van Oosterom said his country and Uruguay are organizing a conference in Montevideo next month “and one of the issues we will address is an equal rights coalition to intensify the diplomatic cooperation between like-minded countries to strengthen the rights of LGBT people worldwide.”

“It’s not easy,” said France’s UN Ambassador Francois Delattre. “There are counter-reactions. There are many countries who are opposed, reluctant. So it’s a fight and France wants to be in the forefront of this fight together with the United States and our other friends.”