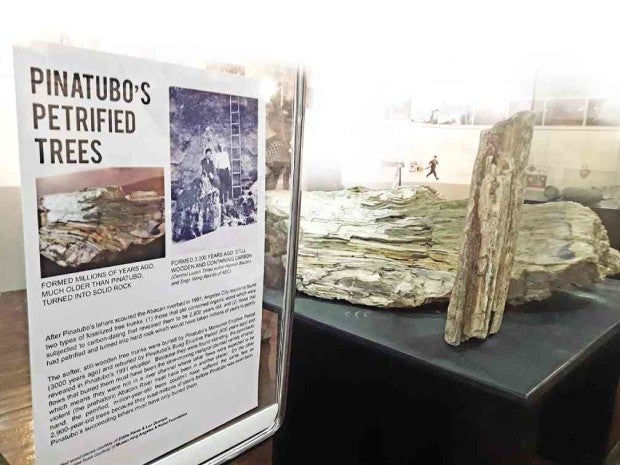 THE PINATUBO Museum at Holy Angel University in Angeles City opened on the eve of the 25th anniversary of Mt. Pinatubo’s 1991 eruption. E.I. REYMOND T. OREJAS/CONTRIBUTOR

ANGELES CITY—There is a place to visit for a quick understanding of how Mt. Pinatubo came back to life in 1991 after almost 500 years of slumber and how eight million people in Central Luzon survived its eruption, the world’s second largest in the 20th century.

Information plus real ash, sand, rocks and pumice stones that Mt. Pinatubo spewed out from its pits are now featured in a museum, which offers itself as a guide for younger Filipinos living in the shadows of volcanoes.

Built by Holy Angel University here, the museum is housed at the Center for Kapampangan Studies (CKS). It sits next to the permanent museum of National Artist Vicente Manansala.

The Pinatubo museum opened on Tuesday, the eve of the June 15 eruption 25 years ago, joining the few volcano museums in other parts of the world, including in New Zealand (Taupo and Taranaki eruptions) and in Italy (Vesuvius eruptions), according to Alex Castro, the museum curator.

It is more than a museum, said Robby Tantingco, CKS executive director. “It is a memorial and shrine to all those who suffered in the Pinatubo calamities and a place to go for those who want to know about Pinatubo, those who want to remember and revisit the volcano,” he said.

The June 15 eruption lasted for nine hours and was accompanied by Typhoon “Diding,” killing nearly 1,000 people and sending two million residents from Pampanga, Tarlac and Zambales provinces to evacuation centers.

The eruption destroyed P10 billion worth of public infrastructure and forced the closure of Clark Air Base in Pampanga in 1991 and Subic Naval Base in Zambales in 1992, data from the National Economic and Development Authority (Neda) showed.

Because of the disaster, the growth of the gross regional domestic product in Central Luzon slumped to a negative 2.4 percent in 1991, from 7.6 percent in 1988, Neda said.

To date, at least 100,000 families remain in 20 resettlement centers in the lowlands and uplands of Pampanga, Tarlac and Zambales.

The volcano straddles the three provinces within a radius of 20 kilometers, its watersheds draining into eight major rivers exiting through Pasac River in Pampanga.

Open to the public on weekdays or by arrangement during Saturdays, the museum shows a mural timeline of the Mt. Pinatubo eruptions.

A wall-sized mural sculpture, titled “Lumud (Drown)” by Arnel Garcia, is on display, in memory of hundreds of people who died in lahar rampages from 1991 until 1995.

A video documentary gives a bird’s eye view of the disaster starting from June 12, 1991, Independence Day, when the volcano unleashed a huge mushroom cloud.

“Kapampangans got in one serving what others got piecemeal: earthquakes, volcanic eruption, typhoons, floods, ash, rocks and sand raining down from the sky, days of darkness, swarms of locusts,” Tantingco wrote in the book, “Pinatubo (The Volcano in Our Backyard).” It won a National Book Award in 2012.