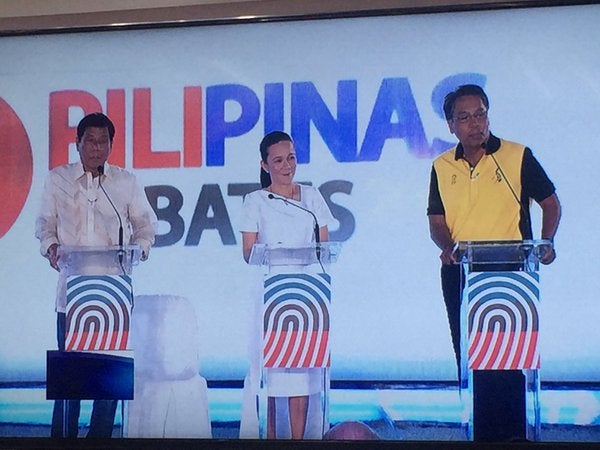 Duterte, Poe, Roxas on stage before 2nd presidential debate, jokes about the delay because of rules

Editor’s Note: The Inquirer catalogues in its “Duterte Says” series all the prepared statements, speeches and pronouncements of President Rodrigo Duterte made during and after the 2016 national and local elections in the Philippines.

Thank you. In this country, there is trouble everywhere–there’s corruption, there’s criminality and the flooding of drugs, which is really instilling fear in us in the government.

I will try to suppress crime. I could not promise you heaven. I will try to stop drugs and if [I am elected] president, I said that in three to six months, I will stop corruption in government. I have to provide security for the present generation and the coming generation would take us into not nowhere but they would be now in command of society.

We protect the children, we have to end crime. And I said drugs must be suppress and I will.

All of my opponents said they have presented a program. I made [only] short remarks, bullet remarks, because all of these are platforms.

I can tell you now that I will provide leadership, not only the platforms. Leadership, and maybe [I will] copy the best of their (presidential candidates’) programs at ayusin ko (and I will fix them) if they’re good with their programs; Grace (Poe) and Mar (Roxas), I will adopt them if they’re good and I will do it.