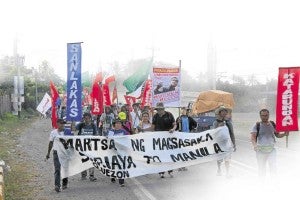 In this April 17, 2016 file photo, farmers from Quezon call for genuine agrarian reform and the return of coconut levy funds to coconut farmers. CONTRIBUTED PHOTO

Piñol gave reporters a peek into the thinking of Duterte on the issue, as he announced that the incoming President ordered chief legal adviser, Salvador Panelo, on Wednesday night, to ensure the release of the recovered funds to farmers in the sector.

“This is an emotional issue for the coconut farmers, including my late mother,” incoming Agriculture Secretary Manny Piñol quoted Duterte as saying during the second meeting with his Cabinet secretaries-designate at the Philippine International Convention Center in Manila Wednesday night.

Piñol did not give further details on how the coconut levy collection affected Duterte’s mother, but according to him, the President-elect told his Cabinet, “The coconut levy funds should be given to the farmers.”

Piñol, who related the President’s statement to media, said he had asked the President to make a policy statement on the coconut levy funds because he had been receiving a lot of questions on the issue.

“I am directing Attorney Panelo to look into this matter and make sure that the coconut levy funds are released to the farmers,” Duteerte said, according to Piñol.

Piñol also informed Duterte he had already talked with officials of the Philippine Coconut Authority (PCA) for a six-year coconut planting program to cover 600,000 hectares.

“PCA officials had assured me the agency and its stakeholders are capable of producing planting materials to cover the 600,000 hectares of new coconut areas in the country,” Piñol said.

Piñol drafted the project proposal Coconut Productivity and Rehabilitation Agenda (COPRA), which calls for a massive replanting of coconuts in the country to regain the country’s status as the number one coconut producer in the world.

In this program, farmers will have access to quality coconut seedlings, fertilizers and irrigation equipment through a soft loan or plant-now-pay-later scheme. The program also encourages farmers to plant secondary crops like abaca, cacao, coffee and black pepper aside from coconuts.

Piñol projected thousands of jobs to be generated by the program, resulting in greater economic activities in the countryside.

“With the expected release of the coconut levy funds to the real owners and the start of the massive national coconut planting program, the coconut industry is expected to regain its reputation as one of the country’s biggest foreign exchange earners for the country,” he said.

Farmers who had lobbied Malacañang and Congress for the declaration of the coco levy as a public fund and should be used solely for the development of the coconut industry, had earlier expressed dismay over the failure of the last Congress to pass the bill.

The farmers’ group Pakisama particularly pointed out that Senator Cynthia Villar, chair of the the Senate committee on agriculture, failed to deliver the promise she made as early as November 2014, to sign the bill. Villar was suddenly hard to find in January and February 2016, when she, as committee chair, needed to sign the bill before the plenary deliberation in Congress.

Pakisama and allied groups had already unified the support of all the other senators, including Senator Serge Osmeña, whose initial questions about the bill had already been answered; as well as Senators Francis Escudero and Grace Poe, who already committed their support.

The P71 billion shares recovered in October 2012  from the San Miguel Corporation and given back to the government, was only a part of the whole amount that should have been returned to the farmers.  (The SMC was once chaired by Eduardo “Danding” Cojuangco — dictator President Ferdinand Marcos’ close associate who benefited from the coconut levy.)

With the cash already returned to the National Treasury and the United Coconut Planters Bank (UCPB), the fund remained untouched for years because of the absence of an Entry of Judgment by the Supreme Court, until early this year, when the petition to declare the coco levy as a public fund has also been placed in the entry of judgment of the Supreme Court.

Villar practically prevented the bill from reaching the plenary discussions in Congress, the farmers said.

Farmers said they might need to re-file the bill again.  SFM