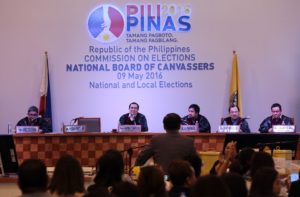 MANILA — The Commission on Elections en banc, voting 4-3, officially granted on Thursday, the plea of the Liberal Party and its presidential candidate Mar Roxas to extend the deadline for the filing of campaign expense reports or the statement of contributions and expenditures (SOCE) so as not to defeat the “will of the people” in the May 9 elections.

The en banc approved the extension of the deadline for the submission of the SOCE until June 30.

Comelec spokesperson James Jimenez said the en banc did not bend rules for the Liberal Party as the extension would benefit others who failed to file their SOCEs such as the Pwersa ng Masang Pilipino and Aksyon Demokratiko.

He added that the poll body took into consideration the effect of non-extension, saying the “Comelec does not function in a vacuum.”

“The decision was backed by laws and precedent,” Jimenez said.

“In deciding to extend SOCE deadline, we were thinking — are we going to defeat the will of the people?” he added.  “This will benefit everyone, hindi lang LP ang apektado dito (…it’s not only LP that is affected here).”

Vice President-elect Leni Robredo, seven senators, scores of congressmen and thousands of local officials are members of the Liberal Party.  If the ultimate penalty were to be imposed on the party, all of them could not assume power on June 30, 2016; hence the concern of the Comelec that a strict ruling against the LP would thwart the “will of the people” through the ballot.

Those who voted in favor of the SOCE extension were Commissioners Rowena Guanzon, Art Lim, Al Parreno and Shariff Abbas.

Bautista voted for the late filing of SOCE with imposition of penalties.  SFM