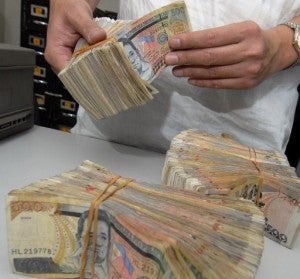 LAOAG CITY—- The city government is tracking down its treasurer, Elena Asuncion, following the loss of P85 million from Laoag’s coffers.

Asuncion flew out of the country on Tuesday (June 14) on board a Philippine Airlines jet bound for Hawaii, after officials tried to secure a hold departure order against the city official, the Bureau of Immigration Office in Ilocos Norte said.

Asuncion was last seen attending the June 12 Independence Day celebrations here but she reportedly left before Laoag City Mayor Chevylle Fariñas could serve her a relief order for the discrepancies uncovered in the city government’s accounts.

At press time, the Provincial Treasury Office was assisting a team sent out by the Bureau of Local Government Finance (BLGF), which arrived here on Thursday to investigate the missing funds.

Fariñas announced that she had re-assigned seven employees manning the cash division of the City Treasurer’s Office.

The mayor also sealed the treasurer’s office to preserve evidence until the completion of the audit report.  SFM/rga