Muslim view of LGBT people in spotlight after Orlando attack 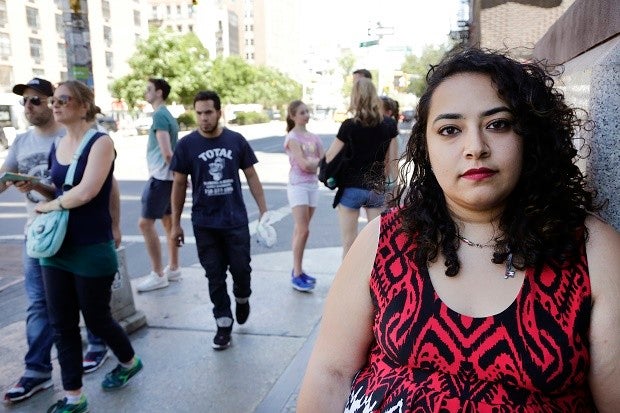 In this Tuesday, June 14, 2016 photo, Eman Abdelhadi, a lesbian doctoral student at New York University, poses near the campus. Gay Muslims said the shooting in an Orlando nightclub sparked a complex set of emotions. They were devastated for their fellow gays and lesbians, while deeply concerned about anti-Muslim bias the shooting would generate. At the same time, they were caught at the intersection of two mutually wary groups: LGBT people who consider Islam uniquely anti-gay, and Muslims prejudiced against gays and lesbians. Abdelhadi said she feared “Islam and queerness being pitted against each other in a sort of battle and that just making it impossible for me to exist as I am.” AP

NEW YORK — After the massacre in Orlando, the head of a prominent Muslim advocacy group stood before a bank of microphones and made remarks beyond the expected condemnations.

Along with denouncing the attack by gunman Omar Mateen as a violation of Islam, and offering prayers for the victims at the gay nightclub Pulse, Nihad Awad of the Council on American-Islamic Relations expressed unequivocal support for lesbian, gay, bisexual and transgender civil rights.

“For many years, members of the (LGBT) community have stood shoulder to shoulder with the Muslim community against any acts of hate crimes, Islamophobia, marginalization and discrimination. Today, we stand with them, shoulder to shoulder,” Awad said at a Washington news conference. “We cannot fight injustice against some group and not against others.”

Omid Safi, director of the Duke University Islamic Studies Center, called the comments, and similar statements from other major Muslim groups, a “shocking development” from leaders who until last Sunday’s tragedy “would probably have never been seen uttering the words gay and lesbian publicly.”

The mass shooting, perpetrated by an American Muslim in a communal space for gays, has brought to the forefront Muslim attitudes toward homosexuality and the plight of LGBT Muslims.

A spokesman for Awad played down the director’s remarks as nothing new. But Faisal Alam, who is gay and a founder of the support and advocacy group Muslim Alliance for Sexual and Gender Diversity, said such comments have opened “a historic opportunity for us to talk to one another.”

Eman Abdelhadi, a doctoral student at New York University who came out in college, said the attention could provide some much-needed visibility for LGBT Muslims who are “often erased.”

“The vast majority of American Muslims are illiterate as it relates to queer issues,” said Ahmed Younis, an author who specializes in Islamic law and advocates acceptance of gays and equal treatment for women. He said he hoped for some real soul-searching beyond expressions of solidarity toward fully integrating gays and lesbians into Muslim life.

LGBT Muslims said the shooting sparked a complex set of emotions. They were devastated for their fellow gays and lesbians, while deeply concerned about anti-Muslim bias the shooting would generate. At the same time, they were caught at the intersection of two mutually wary groups: LGBT people who consider Islam uniquely anti-gay, and Muslims prejudiced against gays and lesbians.

Abdelhadi said she feared “Islam and queerness being pitted against each other in a sort of battle and that just making it impossible for me to exist as I am.”

READ: Obama to Orlando gay community: ‘You are not alone’

The day after the shooting, more than 50 LGBT advocacy groups made an appeal for the gay community to reject anti-Muslim rhetoric. “We know what it looks like and feels like to be scapegoated and isolated in the midst of a crisis,” the groups said.

But Younis said the relationship between Muslims and LGBT advocates “is not a natural or deep alliance.”

Many US Muslim immigrants come from countries and cultures where gays are often violently persecuted, and harbor a deep antipathy toward LGBT people. But younger generations of American Muslims generally don’t share these views, Younis said.

Last year, after the Supreme Court legalized gay marriage, author Reza Aslan and actor Hasan Minhaj published a letter to “our fellow American Muslims,” urging them to support civil rights for gays, even if Muslims are uncomfortable with, or outright opposed to, same-gender relationships.

“Rejecting the right to same-sex marriage, but then expecting empathy for our community’s struggle, is hypocritical,” Aslan and Minhaj wrote on ReligionDispatches.org. “We have to fight for the right of others to live their lives as freely as we want to live ours.”

A survey last year by the Public Religion Research Institute found four in 10 US Muslims support same-sex marriage — compared with 53 percent of all Americans who said the same. About two-thirds of Muslims in the survey favored civil rights protections for LGBT people in jobs, housing and public accommodations, compared to seven in 10 of all Americans.

At the time, he said Muslims generally rejected or ignored his work challenging the overwhelming Islamic consensus that same-gender sex is to be condemned. But over the years, Kugle has noted a growing openness in the US and elsewhere to discussing the topic. He sees evidence of this shift in the new films, books, articles and blogs about gay Muslims.

The Duke Islamic Studies Center is in the midst of a year-long project examining Islam and sexuality, including same-sex relationships, part of a wider scholarly re-examination of Muslim teachings on the subject, according to Safi. The research is mostly occurring in the West, but Muslims from South Africa, Malaysia and other countries participate in the work.

“So many Muslims — especially professionals, university students, and families dealing with LGBT issues — are searching for alternative ways of practicing Islam that are inclusive and just. Muslim leaders are lagging behind in this,” Kugle said.

LGBT Muslims are more easily connecting with each other through the internet, Alam said. Gay and lesbian Muslims have formed local organizations in six cities, Alam said, along with some informal support networks, and hold an annual retreat. Still, these meetings remain largely private, a reflection of the continued difficulty of being openly gay in their communities. Several colleges now have Islamic chaplains, another source of support for young gay Muslims.

LGBT Muslims and their allies are also creating prayer spaces that welcome all sexual identities. Among them are Unity Mosques, which began in 2009 in Toronto, that include mixed-gender prayer and women-led services, although the sites sometimes struggle to stay open, said El-Farouk Khaki, an immigration lawyer based in Toronto and founder of Salaam: Queer Muslim Community.

READ: Was Orlando gunman sexually conflicted? And did it matter?

Imam Daayiee Abdullah, who works from the Washington area and leads the Mecca Institute, which offers Islamic courses from a progressive viewpoint, said he was ostracized by other Muslims when he came out as gay 20 years ago and was “not necessarily considered Muslim.” But in the last decade or so, he has noticed a growing receptiveness among American Muslims to at least listen to his arguments for acceptance.

Alam, who travels the country speaking to college students about being gay and Muslim, said coming out is still “an incredibly risky proposition” for many. He did so at age 19, to parents he said are “more tolerant than they are accepting.” He said he’s encouraged by the statements from many Muslim leaders after the attack in Orlando, but he hopes it’s more than lip service.

“I think there’s a sense within the community of ‘Is this too good to be true?’ What does this really mean that they stand with us? Is it theological acceptance? Is it just that we won’t stand in the way of LGBT rights in this country?” Alam said. “Those are the nuances that definitely have to be worked out.”