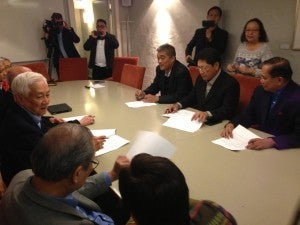 President-elect Rodrigo Duterte’s peace negotiators and the National Democratic Front of the Philippines agreed in Oslo, Norway to hold formal talks in the third week of July and have listed five items in the agenda for the talks. Facing the camera are the incoming government’s representatives (from left) Hernani Braganza, Silvestre Bello III and Jesus Dureza. (Photo courtesy of NDFP legal consultant Edre Olalia)

DAVAO CITY — After two days of preliminary talks in Oslo, the peace panels of the incoming administration of Rodrigo Duterte and the National Democratic Front of the Philippines agreed that formal talks will be held in the third week of July, and listed the five agenda in the talks, including an interim ceasefire agreement and the immediate release of the NDFP consultants and officials, as well as all political prisoners through an amnesty proclamation.

The government panel and the NDFP agreed to discuss five agenda items in the formal talks including the affirmation of previously signed agreements like the Comprehensive Agreement on Respect for Human Rights and International Humanitarian Law (CARHRIHL).

The second agenda item would be the “accelerated process for negotiations, including the timeline for the completion of the remaining substantive agenda for the talks: socio-economic reforms, political and constitutional reforms, and end of hostilities and disposition of forces.”

The third agenda is the reconstitution of the Joint Agreement on Safety and Immunity Guarantees (JASIG) list, while the fourth agenda is the amnesty proclamation for the release of all political prisoners subject to the concurrence of Congress.

The fifth agenda item is the mode of the interim ceasefire which would include mechanisms and coverage of the agreement.

“Formal peace talks will resume in the third week of July 2016 in Olso, Norway and shall be conducted in accordance with previously signed agreements by the Parties,” both parties agreed in the joint statement signed at the end of the meeting early Thursday (June 16, Manila time, and June 15, Norway time).  SFM/rga