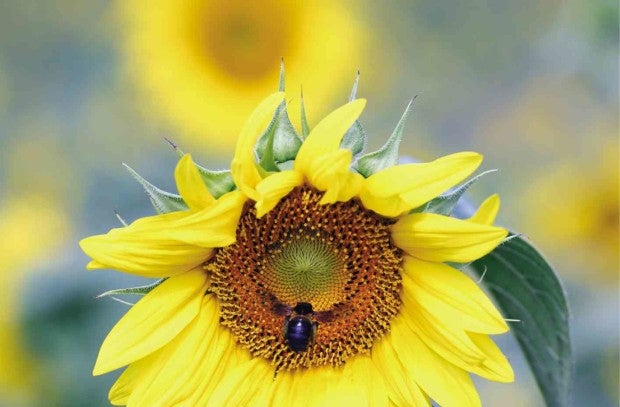 BEES, like this one sucking nectar from a sunflower in a plantation in Ligao City, Albay province, play a crucial role in agricultural production. The insects’ role in pollination is one of the main ingredients in the growth of plants. NIÑO JESUS ORBETA

LOS BAÑOS, Laguna—A beetle, slightly bigger than a grain of rice, is threatening the native bee species, after it destroyed hundreds of colonies of commercial bees in Mindanao, a group of scientists here said.

Scientists, led by Dr. Cleofas Cervancia of the University of the Philippines Los Baños (UPLB), are studying the distribution pattern of the small hive beetles (SHB), a species introduced from sub-Saharan Africa that has infested bee colonies in Australia, North America and parts of Europe.

In Asia, the presence of SHB (Aethina tumida Murray) was first detected in Lupon town in Davao Oriental province where it infected European bees (Apis mellifera) there. European bees in the Philippines are commonly used for commercial purposes.

Visible to the naked eye, SHB feed on the pollen and the brood. It defecates inside the hive giving the honey a rancid odor, Cervancia said.

She said SHB’s presence in the country was noted in June 2014 after it hit 687 colonies in Davao Oriental. The infestation had spread to apiaries (bee farms) in General Santos City, Tagum City and Panabo in Davao del Norte, affecting 40 more colonies, as of December 2015.

“We can say about 80 percent [of Mindanao’s commercial bee population] is affected,” Cervancia said, noting that this was a “conservative” estimate of the extent of the damage.

The infestation, she said, had cost millions of pesos worth of losses to beekeepers, as each colony costs about P20,000. 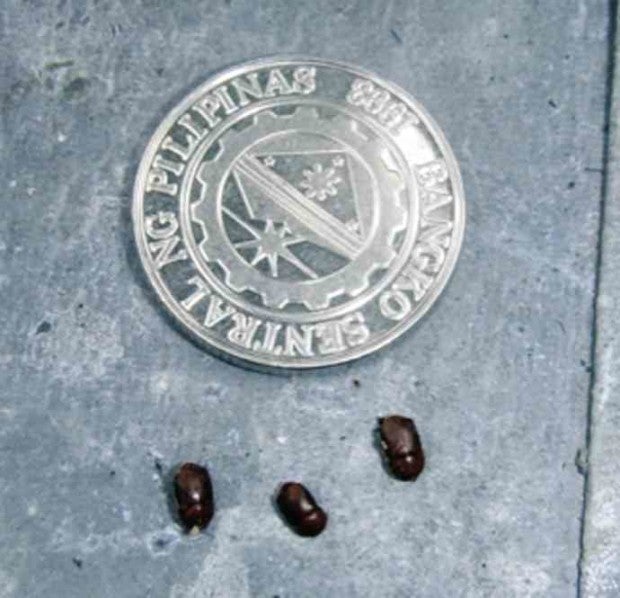 The entry of the small hive beetle (SHB), a pest slightly bigger than a grain of rice, is threatening bee populations in the country, however. It has already infested hundreds of colonies in Mindanao and is threatening to infest more bee colonies elsewhere unless its spread is prevented. CONTRIBUTED PHOTO

Cervancia said scientists are flying in to Mindanao later this week to continue an experiment by the UPLB and the Department of Agriculture’s Bureau of Animal Research on the “transfer” of SHB from European bees to the local bee population.

Citing a report that her group intends to publish soon, Cervancia said three colonies of Apis cerana, a native species, were infested by SHB within 24 hours after these were exposed to an SHB-infested apiary in Davao.

The report said how SHB reached the Philippines remains unknown, although scientists suspect that the illegal shipment of queen bees from abroad was the “likely route.”

“Queen bees, along with their young, are kept in a container as small as a matchbox, hence, these could be easily smuggled into the county,” Cervancia said in a recent interview.

Cervancia, who is also president of the Regional Commission for Asia of Apimondia, an international federation of beekeepers, said commercial beekeepers import queen bees from Hawaii and Australia to improve the genetic pool and increase the stock of commercial bees.

The Philippines, she said, used to import about 1,000 queen bees yearly, until Agriculture Secretary Proceso Alcala, in 2012, issued an administrative order transferring the regulation of bee importation from the Bureau of Plant Industry to the Bureau of Animal Industry (BAI).

“Queens are imported … but the recent changes in importation policies slowed down the process. Hence, colonies are weak, making them vulnerable to SHB damage,” Cervancia’s report said.

In 2015, the BAI recommended the use of traps laced with a chemical paste, called Maxforce, to control SHB infestation in Mindanao.

Cervancia said Maxforce is used as cockroach bait and is banned in European countries because it is classified as one of the most harmful chemicals to bees.

“So far, SHB infestation is confined in Mindanao. But one day, it will spread into the Visayas and Luzon and to native bees,” Cervancia said.

She asked incoming Agriculture Secretary Emmanuel Piñol to quarantine and stop the movement of bees from Mindanao. She also urged Piñol to facilitate importation of 1,000 queen bees by October to fill the gap in queen bee population.

More than its byproducts, like honey, bees serve as important commodity in agriculture, with 35 percent of crops, mostly high-value products like mango and rambutan, being bee-pollinated, Cervancia said.

Bees, as pollinators, increase agricultural yield by more than 50 percent, she added.