Only those eyeing scholarships in state universities stay in public schools - DepEd
By: Jodee A. Agoncillo - Reporter / @jagoncilloINQ
Philippine Daily Inquirer / 10:04 AM June 14, 2016 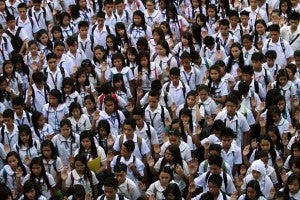 Millions of students troop back to public schools in Metro Manila every June despite challenges faced by the school system. INQUIRER FILE PHOTO

MANILA — With the P22,500 vouchers granted by the Department of Education for the tuition of incoming senior high school students, majority of the Grade 11 students in Caloocan, Malabon and Navotas have transferred to private schools, teachers said. Most, if not all of the honor students, however, remain in public schools to secure their present and future scholarships, according to the teachers.

On Monday, outgoing DepEd Secretary Armin Luistro graced the opening of classes at the Malabon National High School, welcoming the implementation of the K to 12 program. “I am very happy. Everything is falling into place,” he told the Philippine Daily Inquirer in an interview.

Public school teachers and principals in Caloocan, Malabon and Navotas cities considered Monday’s school opening in their areas successful despite the “very, very low” turnout of enrolees in public senior high schools.  The low enrolment rate might have been due to the transfer of Grade 11 students to private schools, covered by the education vouchers, under the K to 12 program. The only complaints received by school officials were about the shortage of chairs due to late enrolees, students who lacked legal papers for enrolment, and preschool students with first day jitters.

In Navotas City, of the 797 Grade 10 completers, only 264 re-enrolled in public high schools; 103 entered state universities and colleges, while 429 enrolled in private schools.

In Caloocan City, around 44.79 percent—-or 9,047 of the expected 20,199 grade 11 students–have not yet enrolled in Caloocan City, Rita Riddle, the city’s division school superintendent, said.

In Malabon National high School, the city’s biggest secondary school that accepts grade 11 students, only 276 of the 953 Grade 10 completers enrolled, while the rest transferred to other schools.

In the whole of Malabon City, only 1,290 of the 4,629 Grade 10 completers enrolled in the 14 public schools that accept senior high school, according to Division School Superintendent Jennylyn Rose Corpuz.

“Perhaps, some of the students are taking their chance to enrol in private schools where classrooms are air-conditioned, where students get to have new sets of uniform, new set of friends,” the school’s principal Ma. Victoria Degulay said.

Rupert de Guzman, 15, however, chose to stay at the Malabon National High School out of fear of hidden charges in private schools. De Guzman, who wanted to pursue accountancy in college, said he felt comfortable and much safer in a public school.

For Angela Feliciano, she finds public schools to be more competitive in terms of having quality teachers and quality teaching than private institutions.  (One reason could be due to the improvement of public school teachers’ salaries over the years.) “It’s my choice to stay in a public school. I learned to be a better English speaker, became a more flexible person, learned about real life in Malabon National High School than in Immaculate Concepcion,” she added.

Staying in a public school is 15-year-old Kyla Louisse de Silva’s way of saving up for her college education. “It’s more practical also given that my house is near Malabon National High school,” she said.

The voucher program has actually given public schools a breathing space since some of the public schools are not yet ready in terms of infrastructure and number of teachers. “A school is mandated to accommodate 320 but we can only accept 60 students now since the construction of some of the buildings are ongoing and will be finished next year,” said Arcigal.

“The vouchers gave the students more options since our school only offers the General Academics track,” he said.

But the surprising  thing is, the high performing students have opted to stay partly because of the Scholar ng Bayan bill, which requires them to be students of public schools to get into top universities come college time.

“But the good thing is everybody enrolled. It’s not a matter of where they transferred to or studied,” Navotas National High School principal Maria Cristina Robles said, boasting of their K12 education system and ITC-based learning and quality teachers.

During the start of the school on Monday, there were shortages in chairs in public highschools in Navotas City and some elementary schools in Caloocan City because of the late enrolees. This problem was immediately solved by utilizing armchairs and mono-block chairs from unoccupied classrooms.

The voucher program for senior high school allows students to choose the focus of their education and training.  “Through the Voucher Program, students and their families are able to exercise greater choice in deciding the Senior High School program that is most relevant to their needs and career goals,” the DepEd website says.

The voucher system gives students tuition “discounts” and these subsidies are given to private senior high schools where the students are enrolled. “The voucher enables students to claim a ‘discount’ or a deduction from the cost of tuition and other fees charged by a non-DepEd SHS where he or she will enrol. The voucher subsidy is not given to students directly in the form of cash but will be disbursed by DepEd to the non-DepEd SHS where he or she enrols.”  More details on the senior high school voucher program can be found  at http://www.deped.gov.ph/k-to-12/faq/voucher-program.  SFM/rga