‘A triumph of Kapampangan resiliency’ 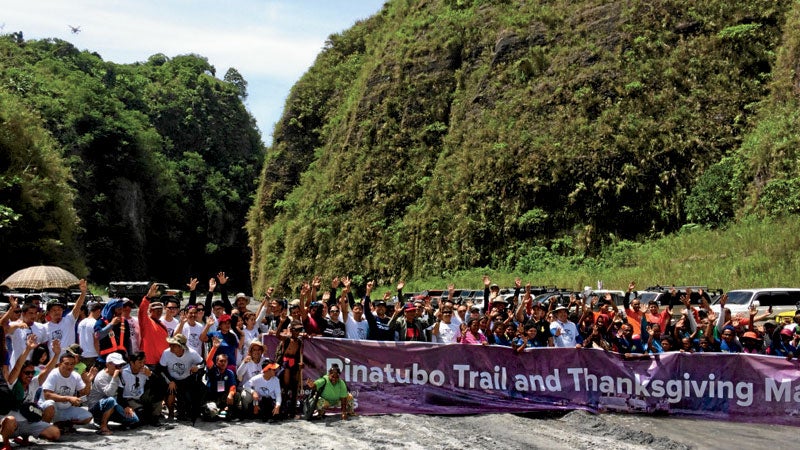 25 YEARS AFTER THE BLAST Drivers and crews of 4×4 all-terrain vehicles revisit a lahar watch point in the hinterlands of Porac, Pampanga province, to mark the 25th anniversary of Mt. Pinatubo’s massive eruption in 1991. TONETTE OREJAS/INQUIRER CENTRAL LUZON

PORAC, Pampanga—More than 120 offroaders revisited a lahar watch point here on Saturday to start a series of events celebrating the “triumph of Kapampangan resiliency” following Mt. Pinatubo’s 1991 eruption that set off a lingering disaster in Central Luzon.

The commemorative trail to Delta 5 lahar monitoring station and a thanksgiving Mass held at the Sapang Libut portion upstream of Pasig-Potrero River were part of the commemoration of the 25th anniversary of the volcano’s eruption on June 15, 1991, said Levy Laus, chair of the Pinatubo executive committee.

Mounted on their powerful vehicles, members of Pampanga Offroaders Club Inc., Angeles City Four-Wheelers, Pampanga Adventure Team, Club Overland and Porac 4-by-4 Club trekked to Delta 5 via the FVR Megadike in Porac, hurdling rocks, uneven riverbed, soft sand and pools of water like these were playgrounds.

Police set up Delta 5 atop what the Aeta people called Mt. Macondo in 1993 to give timely warnings to lowland communities of impending lahar flow (volcanic debris washed down by rains from the slopes).

Offroaders took their cue from the warnings, scrambling to where evacuation was needed, said Roberto Manalang, one of dozens of offroaders helping in rescue missions at the time.

Church records of Bacolor were saved by offroaders on the alert given by the late Fr. Nestor Tayag, he said.

He remembered with a laugh how Delta 5 sent responders and residents into panic in August 1994 when one of the radio operators announced in thick Visayan accent that an avalanche of 45 feet of lahar was spotted and headed to Bacolor.

“When the heat of lahar cooled off and the its sound similar to a stampede of horses was over, local officials realized that what rolled down was four to five feet of lahar, not 45 feet as the radio operator announced,” said Manalang.

On Saturday, the offroaders were joined by more than 100 Aeta of Barangay Sapang Uwak led by Porac Mayor Condralito de la Cruz. The indigenous people evacuated four times in the lowlands then transferred to Palayan City where many stayed for seven years.

They began returning to their mountain homes starting 1993 to “end their dependence on relief [food],” said their village chief, Conrado de la Cruz.

“From just about 500 Aeta in 1991, our number has reached almost 2,000,” he said. Their eldest is 96-year-old Jungle Serrano who still wears his lubay (G-string) and wields his bow and arrow for catching wild animals.

“It’s still difficult to plant crops here because the soil is sandy,” said Teresita Tiglao, who was 14 years old when the volcano woke back to life. They grow banana, yam and papaya.

“I wish we could grow rice and coffee again like our elders did before the eruption,” she said.