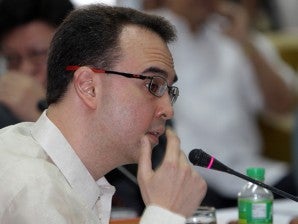 Virgilio “Garci” Garcillano’s wards are still in the Commission on Elections and unless Comelec Chairman Sixto Brillantes weeds them out, future elections will be susceptible to fraud, Senate Minority Leader Alan Peter Cayetano warned Wednesday.

Cayetano said Rey Sumalipao, a former election supervisor of Lanao del Sur, is one of at least six persons with lingering ties to Garcillano, a former election commissioner whose wiretapped phone conversations with then President Gloria Macapagal-Arroyo spurred suspicions of massive fraud in the 2004 presidential polls.

Sumalipao was grilled at the joint hearing of the Senate blue ribbon and electoral reforms committees on Tuesday after he admitted ignoring certificates of canvass (CoCs) reflecting zero votes for the apparent winning opposition candidate, Fernando Poe Jr., in the Lanao del Sur tallies.

According to Sumalipao, the focus then was on finishing the provincial canvass as soon as possible, provoking senators to berate him for not examining the CoCs despite the “manifest error.” He has since been promoted to regional election director for the Autonomous Region in Muslim Mindanao.

He said that Macarambon and Elnas were holding positions in the poll body’s Election and Barangay (village) Affairs Division, and that Nala was the Comelec supervisor of Surigao del Sur.

“The reason poll fraud existed in 2004 and 2007, and continues to exist today, or perhaps even in the future, is that the Comelec allowed it to exist by letting anomalous individuals run sensitive positions,” Cayetano said.

“Sumalipao is just one of the many Garci boys named in the Garci tapes,” the senator said, referring to the wiretapped conversations where Garcillano was supposedly heard instructing subordinates on ensuring Arroyo’s victory in 2004.

Cayetano noted that in one segment, a man believed to be Garcillano was heard telling another believed to be Sumalipao to refute allegations by an official of the National Citizens’ Movement for Free Elections (Namfrel) that cheating had occurred in Lanao del Sur.

The senator said Namfrel records eventually confirmed that vote-padding occurred in the province.

Namfrel had observed that seven of the 39 CoCs reflected zero votes for Poe in Lanao del Sur, the group’s secretary general, Eric Alvia, told the Philippine Daily Inquirer on Tuesday.

“Those irregularities would have been equivalent to something between 200,000 and 300,000 votes and may have contributed to the 680,000-vote lead that GMA (Arroyo) enjoyed in the province at that time,” Alvia said.

Cayetano said his earlier opposition to Brillantes’ confirmation as Comelec chairman had stemmed from the latter’s statement that he could not simply fire the “Garci boys” because “there was no concrete evidence” against them.

The senator eventually abstained from voting when Brillantes’ ad interim appointment was submitted to the Commission on Appointments plenary for a vote.

“My point is, the Garci incident happened during the time of [Comelec Chairman Benjamin] Abalos. And all the way to [Chairman Jose] Melo and now, Brillantes. Isn’t it strange that [the Garci boys are still being promoted?” Cayetano said, adding that some of them were mentioned in the Garci tapes and were involved in questionable transactions in the Comelec, including “the Mega Pacific scam [and] the folder scam.”

Cayetano noted that “simple interviews in the Senate alone” resulted in Sumalipao admitting to the error on zero votes.

He likewise noted that witnesses like former Shariah Judge Nagamura Moner had surfaced to reveal what they knew of the poll fraud in 2004.

“I am appealing to all other witnesses who have gone into hiding, a lot of people who have sacrificed so much for this: Now is the time to come out.  Once and for all, I hope we can look forward to a clean 2013 election by resolving the issues of the past and finally unearthing the truth,” he said.

Deputy Customs Commissioner Danilo Lim said the Senate inquiry into poll fraud showed the involvement of Arroyo, for which she should be held accountable despite her poor health.

“As we go through the last quarter of this year, let it be a quarter of reckoning [for] Ms Arroyo,” Lim, a retired brigadier general who once led an unsuccessful revolt against the then President, said in a statement.

“Ms Arroyo can have the best doctors that her ill-gotten wealth can buy. All we want is justice and accountability,” he said.

Lim said he was prepared for Arroyo loyalists who might gang up on him. “In a country where ill health is often used by the corrupt as a ruse to evade persecution, I would rather concern myself with the political health of our people who are hungry for justice,” he said.

According to Lim, the testimonies of witnesses at the Senate inquiry boosted the accusations he and his colleagues “made years ago: [that] the Arroyo government was an illegitimate regime which was the product of a rigged election.”

He said he welcomed President Aquino’s statement that charges would be filed against Arroyo in November.

He added that the Aquino administration “owes it to the brave Filipino people who fought the Arroyo regime’s illegitimate rule and the patriotic soldiers who daringly broke from the chain of command to heed the people’s voice.” With a report from Philip C. Tubeza