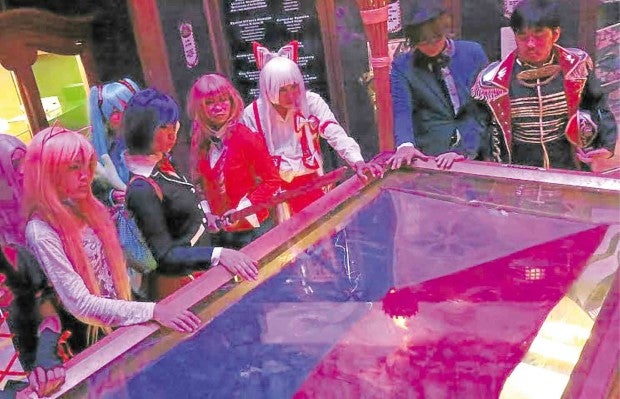 BAGUIO CITY—Everyone assumed Hilbert Tan was dressed up as Gen. Antonio Luna on Sunday when he wandered toward the glass case containing what was arguably the first Philippine flag hoisted by President Emilio Aguinaldo at the proclamation of Philippine Independence in Kawit, Cavite, in 1898.

Tan, 27, a self-described life coach, was portraying a character from the “Warhammer 40k” game when he joined a group of costumed youth that was given a glimpse of the historic but frayed relic.

The flag has been kept for years in a temperature-controlled, dimly lit room of the Gen. Emilio Aguinaldo Museum here put up by the heirs of Aguinaldo’s daughter, the late Cristina Aguinaldo-Suntay.

It was discovered tucked in Aguinaldo’s death bed, although it had not been officially recognized by the government as a national treasure.

Emilio Aguinaldo Suntay III, the general’s great grandson, said he invited teen and young adults dressed as their favorite heroes to view the flag, while the rest of the city watched the Independence Day parade in downtown Baguio.

Suntay said drawing the cosplayers was one of way of exposing a superhero-worshipping generation of Filipinos to true heroism.

“This generation already has some idea of heroism from the comic books they read, to the superhero movies they watch, to the games they play. These stories are always about conflict, of the oppressed fighting their oppressors,” he said.

Climate change, economic recessions and territorial conflicts are the problems plaguing the world of this generation, Suntay said, “so showing them that we can be noble in confronting challenges is important.”

“By granting them a peek at the first flag and all the stories about what it represents, I am hoping this generation would appreciate and emulate real life heroism,” he said.

In Baguio, at least, many believe the relic is authentic. The flag has a distinctive pale-yellow sun symbol which bears a golden face, and its blue field has a lighter hue compared to the dark blue field of the present flag.

Stitched on one side of the banner is the phrase “Fuerzas Expedicionarias del Norte de Luzon,” while the words “Libertad” and “Justicia” run down on the other side of the flag. The letters were stitched with gold silk thread.

Put up to house the flag, the museum has also evolved into a research and archival sanctuary for documents and studies dealing with Luzon heroes who participated in the Philippine Revolution.

The flag, however, is deteriorating, “so making sure the youth can see it whole is important to my family,” Suntay said. With a report from EV Espiritu, Inquirer Northern Luzon