‘Duterte a supporter of lumad’ 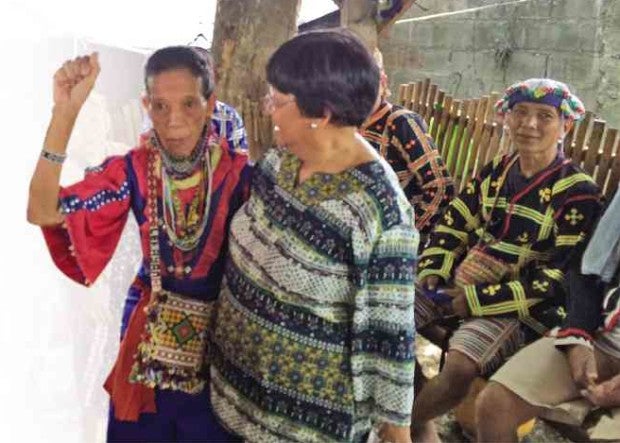 INCOMING Social Welfare Secretary Judy Taguiwalo (right, standing) meets Bai Bibyaon, the only woman leader of the Manobo tribe, on Wednesday. Taguiwalo visited the “lumad” evacuees who have been staying in a church compound in Davao City for more than a year now. NICO ALCONABA/INQUIRER MINDANAO

WILL a thousand “lumad” children languishing in evacuation centers in Mindanao soon be able to return to their homes and to their schools?

With a new school year, and the incoming administration of President-elect Rodrigo Duterte, hopes are high the answer will be in the affirmative.

In a press briefing last week at the University of the Philippines (UP) in Diliman, Quezon City, lumad advocacy group Save our Schools (SOS) Network revealed the continuing plight of around 1,000 lumad (indigenous people) students who, since last year, have remained “evacuated” at the Haran compound in Davao del Sur and Tandag Sports Complex in Surigao del Sur, and have been constrained to hold makeshift classes there.

The students were among around 4,000 lumad who were forced to flee their communities due to military operations nearby.

“Indeed change should come for our distressed indigenous peoples. We are urging President-elect Rodrigo Duterte to order the pullout of all Armed Forces of the Philippines personnel from communities and schools and facilitate the safe return of all displaced lumad,” SOS spokesperson Reina Requioma said.

Requioma recalled one of the worst attacks on a lumad community that happened on Sept. 1 last year in Lianga, Surigao del Sur. An alleged paramilitary group killed two tribal leaders and the executive director of local school Alternative Learning Center for Agricultural and Livelihood Development (Alcadev) and the school was burned down.

“We are hopeful of the coming presidency of Duterte…there had been previous instances when he took concrete action in support of the lumad,” said Kharlo Manano of Salinlahi, one of the groups in the SOS Network.

Manano said that in 2014, Duterte, as chair of the southern Mindanao peace and order council, signed an agreement with the military which barred them from holding camp in a lumad community in Talaingod, Davao del Norte.

“He has made a lot of interventions on the matter of ensuring the safety of evacuated lumad. This is the record we will look for once he assumes his seat as President…,” Manano said.

“It is encouraging that President-elect Duterte has expressed concern that mining is destroying Mindanao. We hope he can continue with the position to regulate, if not stop, mining because this has been the cause of problems in the [lumad] communities,” Tan said./rga