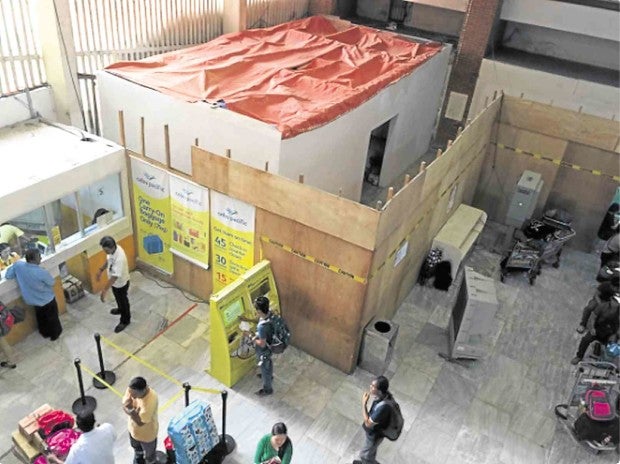 ZAMBOANGA CITY—The airport toilet project at the Zamboanga City International Airport (ZCIA) has been left unfinished and has become an eyesore.

“It remains unfinished. It’s been three or four years [since] construction [started],” said Joimina Halandoon, a buy and sell agent.

She said no substantial improvement in the airport toilets had been in place since construction started.

The airport toilet project was part of the “Kayo ang Boss Ko” (KBK) toilet facilities improvement project, which was started by the Department of Transportation and Communications (DOTC) in 2011.

Mohammad Naga Rascal, the area airport manager, told the Inquirer that there were three restrooms under renovation at the airport under the KBK project, which had a budget of P351 million.

The KBK project seeks to build or rehabilitate at least 1,000 public restrooms in the country’s seaports, airports and train depots.

Rascal said passengers using the ZCIA had been asking questions on the status of the project but he could not answer them.

“Whoever started the project should explain. Our role is only to accept it when it is done,” he said.

The delay in the construction of the additional toilet facility at the airport has been causing discomfort to passengers.

Mayor Ma. Isabelle Salazar said even the existing ones were problematic, with some receptacles not functioning.

Salazar said the condition of the airport’s toilets was “deplorable.”

The ZCIA is being used by at least 1,000 passengers a day, who pay P150 each in terminal fees. There are 26 outbound and inbound flights each day. Julie Alipala, Inquirer Mindanao