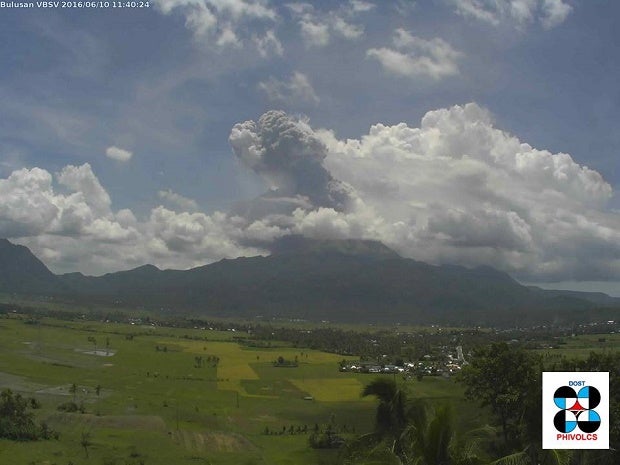 LEGAZPI CITY—Mt. Bulusan in Sorsogon on Friday spewed out a two-kilometer high plume that covered 19 villages with thin layers of ash, affecting some 18,575 residents, the Office of Civil Defense (OCD) Bicol said.

The cloud drifted toward the northwest, and were felt in the towns of Juban and Casiguran, where ash rained down on residents who were given face masks and towels, the agency said. There were, however, no immediate reports of any casualties as a result of the sudden, five-minute steam-driven or “phreatic” explosion.

Philippine Institute of Volcanolgy and Seismology (Phivolcs) resident volcanologist Ed Laguerta said the eruption was similar to an event in February, when Bulusan ejected steam and ash 500 meters into the sky. He said the volcano also expelled a 1.5-kilometer ash cloud in June last year that affected six villages, also in Juban town.

In Juban town, at least 3,575 persons from five villages of Tughan, Cogon, Aroroy, Rangas and Añog were affected, according to Lizpeth Nicolas, head of Juban MDRRMO.

However, the ashfall was characterized as minimal and required no evacuations.

Phivolcs, in an advisory, said it had raised the first of a five-step alert level covering Mt. Bulusan, indicating that “hydrothermal processes are underway beneath the volcano that may lead to more steam-driven explosions.”

4-kilometer radius Permanent Danger Zone is strictly prohibited due to the possibility of sudden and hazardous steam-driven or phreatic eruptions,” it said.

It said civil aviation authorities must also advise pilots to avoid flying close to the volcano’s summit, with residents living near streams or channels of water particularly on the southwest and northwest sectors of the Mt. Bulusan advised to watch out for sudden lahar flows in case of heavy rains.

Laguerta said he advised the towns affected to immediately conduct clearing operations in major road networks affected by ash falls to avoid endangering motorists. Volcanic ash may cause the roads to turn slippery when it rains.

Rachelle Miranda, OCD spokesperson, in a phone interview said no evacuation was reported as of press time, but the agency has already prepared masks, tarps, vests and helmets since March this year for the usage of six towns located around the volcano.

The Philippines sits on the so-called Pacific Rim of Fire, which is dotted with volcanoes and fault lines. In 1991,

Mt. Pinatubo in central Luzon exploded, in what is believed to be the second biggest volcanic event of the century. It spewed millions of tons of magma and ash, darkening the skies and subsequently causing a global cooling of temperatures.