Lapu-Lapu as national hero? Not so fast 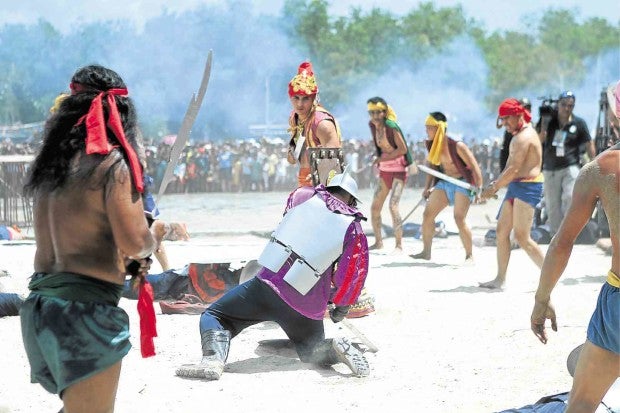 CEBUANOS hail the heroism of Lapu-Lapu through annual reenactments of the Battle of Mactan, like this one that had professional actors playing Lapu-Lapu and his nemesis, the Portuguese explorer Ferdinand Magellan. FERDINAND EDRALIN/CEBU DAILY NEWS

A prominent Bicolano historian and author suggests taking a second look at the heroism of Lapu-Lapu.

Dr. Danilo Madrid Gerona, a member of Sevilla 2019-2022 that is leading and coordinating the global celebration of the 500th anniversary of Ferdinand Magellan’s circumnavigation of the world, said declaring Lapu-Lapu a national hero would be premature.

Gerona, who specializes in pre- and Spanish colonial period accounts, is the only non-Spanish member of the multisectoral committee based in Seville, Spain.

The committee published the book “Ferdinand Magellan, The Armada de Maluco and the European Discovery of the Philippines,” using sources from archives in Seville.

Some history books describe Lapu-Lapu as the first native Filipino who fought Spanish colonizers, but Gerona contended that Lapu-Lapu’s heroism was based on the wrong belief that he killed Magellan, a Portuguese explorer who sailed under the Spanish flag.

He said there was a dearth of information on Lapu-Lapu’s actual participation in the Battle of Mactan in 1521. “The story of Lapu-Lapu, depicted with bulging biceps rushing toward Magellan to kill him with a swift stroke of his weapon, is a folklore or ‘fakelore’ that had been repeated for five centuries,” he said.

Gerona said it was not even Lapu-Lapu who killed Magellan. It could be any one of about 1,500 warriors the chieftain sent to fight the foreign troops in the Battle of Mactan.

The historian pieced together the story of the battle from different sources in the original Spanish and Portuguese manuscripts and the accounts of Portuguese chronicler Gaspar Correa, who came to the Philippines with another Spanish expedition four years after Magellan died.

He found Lapu-Lapu mentioned in the chronicles of Antonio Pigafetta, a Venetian who was not even the official chronicler of Magellan’s voyage.

Gerona said primary accounts that Correa obtained showed the battle was not a “one-shot” deal but a complicated story.

Testimonies of 18 of 27 members of the Spanish forces who survived the battle described Lapu-Lapu as viejo, the Spanish description of people 60 years or older. As an old person, Lapu-Lapu would even be exempted from work and taxes imposed by Spain in its colonies, Gerona said.

“It is impossible that Lapu-Lapu led the Battle of Mactan because, based on the description of the survivors, the chieftain was very old, about 70 years old [at the time],” he said.

Accounts also showed that Lapu-Lapu recognized the authority of the Spanish Crown through Magellan and even agreed to pay tribute to the colonizers.

But the relationship soured after Magellan demanded that Lapu-Lapu recognize his anointed supreme chieftain, Rajah Humabon, by kissing the latter’s hand, a European way of recognizing authority, Gerona said.

When Lapu-Lapu refused, Magellan’s troops attacked the chieftain’s village twice, burning the houses. The colonizers launched a full battle to subdue Lapu-Lapu and his allies.

Gerona said Magellan miscalculated the capacity of the native warriors, who only had crude weapons. The Portuguese  declined Humabon’s offer to send hundreds of native warriors to reinforce the Spanish forces, who had better weapons and wore body armors.

Fifty-seven members of the Spanish forces left their bigger ship on a small boat to launch the assault on Mactan. The Spaniards fought the more than 1,000 warriors Lapu-Lapu sent to fight the foreigners.

Gerona said Magellan was first immobilized by a poisoned arrow that hit his leg. The leader of the Spanish expedition was then killed with a bamboo lance to the chest.

Gerona said 18 members of the Spanish forces were able to return to Spain. Nine survivors were given refuge by Humabon.

With Magellan dead, Lapu-Lapu, the battle’s victor, demanded that Humabon kill the survivors. Humabon refused and sold the survivors as slaves to Chinese merchants.

Gerona said that when Magellan arrived in the Philippines, Cebu was already a thriving port with vibrant communities headed by several chieftains and was actively involved in commerce.

Lapu-Lapu was the supreme chief among four chieftains ruling Mactan at the time. From accounts by chroniclers, Lapu-Lapu was involved in piracy. He would lure trading ships to his territory and demand tributes.

Gerona also discovered that Lapu-Lapu was actually the brother of Humabon’s principal wife but, for some reason, the two chieftains’ relations were not cordial.