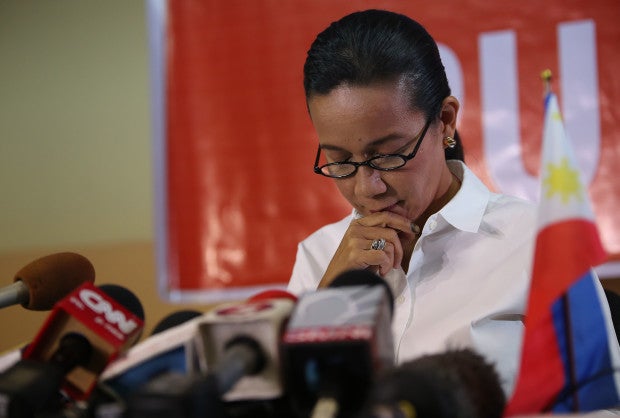 Sen Grace Poe, fixes her eyeglasses as she holds a press conference to announce that she is conceding the presidential race to Mayor Rodrigo Duterte, hours after the polling precinct closed, Monday, May 9, 2016. Photo by Jay Morales/Poe-Escudero Media Bureau

Senator Grace Poe said the absence of a machinery and of the full backing of a political group prompted her to “rely extensively on the more expensive media advertising” during the campaign period.

This was how Poe explained on Thursday the P510.84-million spending that she reported in her statement of contributions and expenditures (Soce), which she filed Wednesday at the Commission on Elections.

“The apparently high amount of expenditures that I incurred for my campaign, as duly reflected in my SOCE and fully covered by campaign donations, reflects my challenging bid as an independent candidate, without the machinery and full backing of a political party, unlike other bets,” she said in a text message to reporters.

“As such, the absence of a party and a nationwide political machinery constrained me as a matter of strategy to rely extensively on the more expensive media advertising that enabled me however to convey my platform of government to our electorate nationwide,” said the senator.

As an independent, Poe said she had no political party to help her “defray most of the campaign expenses, a privilege my opponents enjoyed.”

“I am thankful though that there were supporters generous enough to help me cover the cost of political activities we thought were necessary—well-meaning supporters who genuinely shared my platform of governance which propelled and heightened our campaign, with every Filipino’s dream at heart,” the senator added.

Poe was the first to concede defeat in the presidential race to President-elect Rodrigo Duterte just hours after the May 9 national elections.

She remains a senator until 2019. RAM/rga