'Bring it on,’ says incoming PNP chief on 'P10M bounty' for him, Duterte | Inquirer News

‘Bring it on,’ says incoming PNP chief on ‘P10M bounty’ for him, Duterte 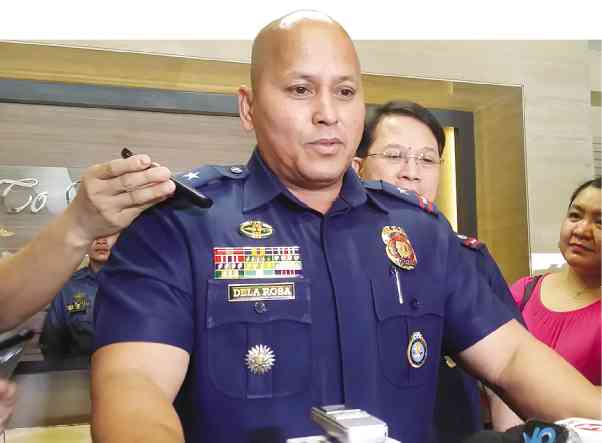 MANILA — A bounty on his head? Bring it on.

The incoming chief of the Philippine National Police (PNP), Chief Supt. Ronald “Bato” De la Rosa, remains unfazed by information that there’s a P10-million bounty on his head and that of President-elect Rodrigo Duterte, which was allegedly offered by drug lords already incarcerated in the New Bilibid Prison (NBP).

“All I can say to that is ‘Bring it on,’” De la Rosa said, in a chance interview with broadcast media late Tuesday afternoon at the PNP headquarters in Camp Crame, Quezon City, where he has been holding office as the head of the PNP Human Resource and Doctrine Development.

Reiterating what he earlier said in an interview with TV5, De la Rosa said he received information that convicts inside Bilibid have been offering to “double” Duterte’s bounty offer of P5 million for drug lords, to have De la Rosa and Duterte killed instead.

De la Rosa said drug traffickers were only feeling “threatened” by Duterte’s anti-narcotics and anti-crime campaign. “Like Mayor [Duterte] said, this foolishness has to stop. You are there in Bilibid, imprisoned, you are serving your sentence, but you still continue your drug business? This world would be really unfair if we let that go on.”

“A lot of lives are destroyed by drugs. This has to stop,” De la Rosa said.

De la Rosa assured the public he would “do everything I can” to stop drug traffickers from paying off the police. “I will see to it that they can’t pay off the police. I will make it very expensive for them to pay the police.”

In the meantime, De la Rosa once again warned that he had a list of police officers—-from “PO1 to generals”—-who “accept protection money from drug lords” and “recycle drugs.” “They will arrest [drug dealers], recycle it, then, for accomplishment, arrest them again. We have a list of that.”

De la Rosa, however, declined to comment on specific names, particularly on Duterte’s recent allegation that three corrupt generals based in Camp Crame have been coddling drug traffickers. “I will wait for Mayor [Duterte] to be the one to say it,” De la Rosa said.  SFM