Duterte flies to Cebu for thanksgiving party with supporters 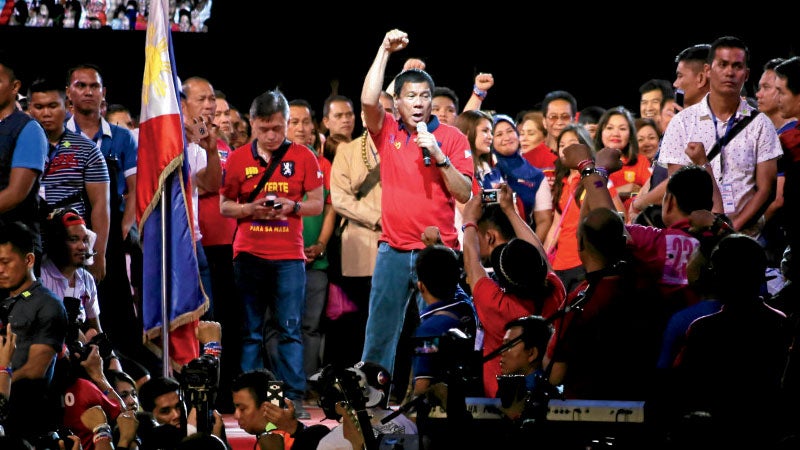 President-elect Rodrigo Duterte during his “miting de avance” at Quirino Grandstand in Luneta before the May 9 elections which he won. KIMBERLY DELA CRUZ/INQUIRER FILE PHOTO

CEBU CITY — President-elect Rodrigo Duterte flew to Cebu on Wednesday  to join in the thanksgiving party organized by a private group that helped him in his successful presidential bid.

Incoming Cabinet secretaries, bloggers and businessmen were among the 280 guests expected to join the private party at the Cebu Country Club along the Governor Mariano Cuenco Avenue in Barangay Banilad, Cebu City.  It was supposed to start at past 6 p.m.

The other guests included local businessmen like Chito Clavano and Johnny Paras, the Veloso clan and the Duterte family, said Jonjie Gonzalez of the Bisaya Napud Movement.

Although the Duranos of Danao were related to the incoming President-elect, Gonzalez said only those who helped in the campaign were invited to the event like  Osmeña.

The Duranos supported the presidential bid of Sen. Grace Poe.

Asked if  Osmeña’s cousin, incoming Cebu City Mayor Tomas  Osmeña would be attending, Gonzalez just laughed and did not confirm anything.

Tomas  Osmeña also declined to comment if he would attend Duterte’s thanksgiving party. But his staff member told GMA-7 news team that the incoming mayor and his wife, acting Cebu City Mayor Margot  Osmeña would attend the party.

Although he supported Liberal Party’s Mar Roxas for president in the last election,  Tomas  Osmeña has said he and Duterte are good friends.

Gonzalez said the two-hour event would not be open for media coverage and would be a private gathering of individuals who pushed to have a Bisaya in Malacañang.

“There will be Cebu lechon definitely. We will be serving wine. There will be a short entertainment,” he told the Philippine Daily Inquirer in a phone interview.

“It will be an informal affair. Basta private affair lang. No media,” he added.

But Gonzalez said the party would end after Duterte’s turn at the mike.

“Then there will be a photo-op after the party with the group,” he added.

Bisaya Napud is a private organization that helped Duterte and Cayetano in their campaign last May elections.

Doris Mongaya, Visayas media coordinator of the Duterte Campaign Team and one of the organizers of the One Love, One Nation Cebu organizing team, said another thanksgiving party has been scheduled for June 25, which would be open to all Duterte supporters.  The event, expected to draw thousands, has been set at the Cebu City Sports Center (CCSC), which could accommodate a big crowd, she said.

But nothing was final yet as of Wednesday, Mongoya said.

“This is open to all groups, all supporters, all individuals,” Mongoya said in a separate interview.

During the party, they would launch the  Cebu Alliance for Change (#call4change) Movement to serve as a watchdog that would monitor the implementation of the pro-people agenda under  the  Duterte administration.

He was ahead of Roxas  by about half a million votes even if the LP standard bearer had the support of most local officials.

After the party, Duterte was scheduled to meet with lawyer Rex Fernandez of the Duterte Campaign Team in Cebu at the Adnama Building along Potenciano Larazzabal Avenue in Mandaue City, Cebu.

Fernandez said that shifting the form of government  to federalism would be among the topics that he and Duterte would discuss.

The President-elect will spend the night at the Shangri-La’s Mactan Resort and Spa in Lapu-Lapu City and will fly back to Davao City on Thursday morning, according to organizers of the event.  SFM

Read Next
Woman killed while husband slashed by maid in Singapore
EDITORS' PICK
Look Through: Super Typhoon Karding barrels through parts of Philippines
Motorcycles, smartphones, and cash prizes up for grabs in TNT’s ‘Tuloy Ang Saya’ Raffle in Mindanao
Do all the things you do, faster
POGOs not linked to Illegal online gaming, says Pagcor
House energy committee chair Arroyo bats for cheap electricity
Metro Manila now at moderate risk for COVID-19 — DOH
MOST READ
Robredo supporter tackles elephant in room: No massive fraud in 2022 polls, surveys were just right
Comelec invalidates win of sitting governor in Negros Oriental
DepEd: We are in a crisis situation in education sector
Lives destroyed as armyworms invade Philippine ‘onion capital’
Don't miss out on the latest news and information.