Hillary Clinton: a burning ambition and resilience to match 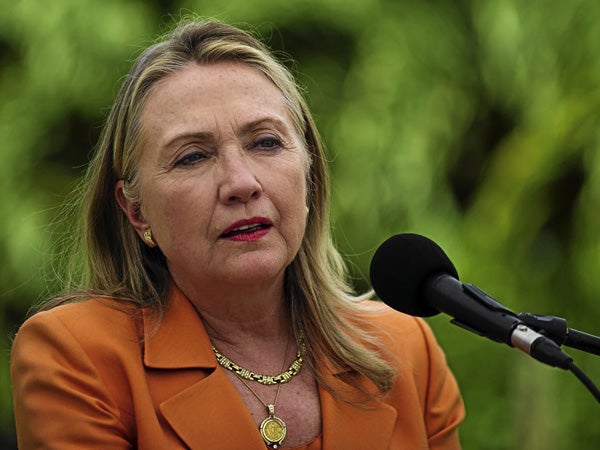 WASHINGTON — On the subject of women in politics, Hillary Clinton is fond of quoting the words of another illustrious first lady, Eleanor Roosevelt, who once said: “You need to grow a skin as thick as a rhinoceros.”

When out on the stump, in cafes, churches and rallies across the country, Clinton tells a thousand tales of the adversity she has faced down over the course of four decades in public life.

“I have the scars to prove it,” quips the former secretary of state, painted by her enemies as “crooked,” “corrupt” — even an enabler of her husband’s affairs — as the Republican attacks flew thick and fast throughout the 2016 White House campaign.

A Machiavellian image clings to the ambitious Midwesterner, dating back to her years in the political spotlight as a tandem with Bill. She is considered “dishonest” by a majority of Americans, and the mudslinging is only set to intensify as she heads into a brutal showdown with Donald Trump.

And yet, at age 68, Clinton now stands at the threshold of the White House, making history as the first woman to carry the colors of a major US political party in the presidential race.

“Yes, there are still ceilings to break for women and men, for all of us. But don’t let anyone tell you that great things can’t happen in America,” Clinton told supporters at a rally in New York, fired up by her victory in the Democratic primaries.

From Chicago to Arkansas

She adored her mother Dorothy but described her father Hugh Rodham, born from Welsh immigrants, as a stubborn and rigid taskmaster.

He imposed his work ethic on young Hillary, but also his frugality. She still puts uneaten olives back in the jar and is loath to waste anything, she wrote in her 2003 autobiography, “Living History.”

Clinton shared her father’s Republican convictions in adolescence, as well as his thunderous laugh. The family is Methodist, and to this day Hillary remains in the church.

Since her school days, she chased success, earning honors and accolades that could fill a bookcase.

From age 13, she took odd jobs to help finance her studies. Smart and ambitious, Hillary was admitted in 1965 to Wellesley, an elite women’s college near Harvard where she was eventually elected president of her class.

It was the social tumult of the sixties, and Clinton’s eyes were opened to the struggle for civil rights, the explosive debate over Vietnam and the fight for gender equality.

When she was accepted in 1969 at prestigious Yale Law School, she met Bill Clinton, the “Viking” from Arkansas who would change the course of her life.

After working for the Children’s Defense Fund, and a period in Washington in 1974 on the commission investigating the Watergate scandal, she gave in and joined Bill in Arkansas.

He was soon elected Arkansas governor and Hillary Rodham joined a prestigious law firm, eventually becoming its first female partner. Chelsea, their only child, was born in 1980.

She soon dropped her maiden name and became Hillary Clinton, first lady of Arkansas and then the nation after her husband’s White House election victory in 1992.

Her assertive style contrasted with that of her predecessors. She played an active political role, symbolized by the location of her office in the West Wing.

Her relations with lawmakers and journalists quickly soured, particularly over her efforts to reform the health care system, a role bestowed on her by her president husband. Republicans branded her a radical feminist.

She suffered intense humiliation when news of Bill’s affair with White House intern Monica Lewinsky surfaced in 1998. But her popularity has never been higher than the 67-percent approval rating she enjoyed in December 1998, according to a Gallup poll at the time.

Pressured by friends and associates in Hillaryland, the first lady launched herself into politics, winning a US Senate seat for New York in 2000.

She laid low during the 2004 presidential race, but four years later she entered the fray to challenge fellow senator Barack Obama, who savaged her vote supporting the Iraq war.

Clinton chose to run on her experience, refusing to campaign on gender. But Americans opted instead for the 40-something political neophyte Obama, bringing hope of change after eight years of George W. Bush.

After a period of detente with his party rival, Obama appointed Clinton secretary of state.

Her critics argue she can claim no major diplomatic successes, and Republicans accused her of incompetence over a 2012 militant attack on the US mission in the Libyan city of Benghazi that left the US ambassador and three other Americans dead.

Her use of a personal email account instead of an official government one has proved a crippling scandal for her, fueling suspicions that the Clintons see themselves as above the law.

But her four globe-trotting years in the post also cemented her image as a powerful stateswoman — consistently ranked the most “admired” woman in America — and that potent mix of tenaciousness and cold realism finally saw the better of her idealist Democratic challenger Bernie Sanders.
RELATED STORIES

Is Hillary Clinton a sure thing for the White House?