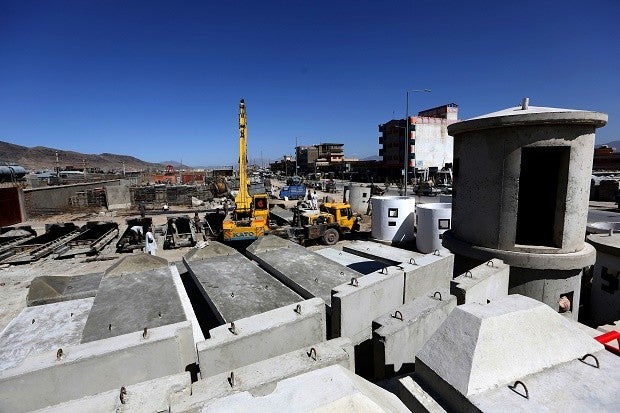 In this Thursday, May 19, 2016 photo, Afghan laborers install cement blast walls around the Omid Khwajazada Construction Company in Kabul, Afghanistan. With every terrorist attack in Kabul, a little more of what made Afghanistan’s capital a garden city of the 1960s disappears behind massive concrete walls designed to thwart suicide bombers and keep the people and buildings behind them safe. AP

KABUL, Afghanistan — Blast walls mushroom in the Afghan capital after each massive attack or a big bombing, turning Kabul into a maze of concrete in a sad testimony that war still remains very much part of life here.

For some, the walls feel like a prison — a far cry from the gardens and peaceful hues that dotted Kabul in the 1960s, before the Taliban. For others, the walls thwart potential suicide bombers and keep their children safe.

Each time the city is targeted, more public space disappears.

The wealthy and the connected erect the walls on the streets outside their homes, sparing no costs to cordon off their quarters and seemingly unconcerned for residents who suffer in choking traffic jams that result.

Afghanistan has been in conflict for almost 40 years and at war with the Taliban for 15 years, since the US-led invasion of 2001. But even a “ring of steel” around Kabul, with tens of thousands of policemen, soldiers and private security guards deployed on a daily basis, has not kept attackers away.

By the time a massive truck suicide bombing in April killed 64 people and wounded hundreds in the heart of Kabul, spreading panic among the city’s population of 4.5 million, the US Embassy had already erected one of the city’s tallest barriers at its western entrance — a 4-meter (13-feet) wall, painted bright yellow, that now looms over one of Kabul’s main roundabouts.

As security demands increased over the years, Hesco bags — huge sacks of steel welded mesh filled with sand and rocks — that once dominated Kabul’s landscape have been replaced by concrete blast T-walls, so called because individual blocks resemble the inverted letter T.

The walls, more known as visual landmarks of Baghdad and other Iraqi cities, are now ubiquitous across Kabul and making them is a booming business, according to Bahir Sediqi, marketing manager for Omid Khwajazada, a company on the outskirts of Kabul that manufactures the 13-ton walls.

Prices are coming down due to higher demand, coupled with lower labor costs amid an unemployment crisis. Blast walls now costs $100 a square meter, he said, compared to $250 before 2014. The walls are transported into the city overnight and winched into place with cranes, he said.

Sediqi says his customers lately tend to prefer the 7-meter (23-feet) model to those 3 meters high. Though he isn’t “happy because the walls turn the city into a prison,” he says working is better than not having a job.

“It’s not only the Afghan government and some foreign embassies and companies that are buying them, but rich people, too,” he said.

For others, they are depressive.

The walls “make you feel as if there is only fighting, violence and terror here,” said Nazir Ahmad, a Kabul resident, as he strolled past the stretch of grey concrete outside the Telecommunications Ministry.

The ministry’s spokesman, Yasin Samim, defended the walls, saying the employees started receiving warnings from the police and the Afghan intelligence agency back in 2012 that their building could be targeted.

“It was felt to be a necessary precaution,” he said. “We’re the center of all the nation’s information.”

As the walls multiplied, they became a canvas for a group of artists calling themselves Artlords — a word play on warlords, who still play a major role in the Afghan society. The Artlords descended on the concrete, painting scenes depicting ordinary Afghans, from street sweepers to policewomen and footballers. 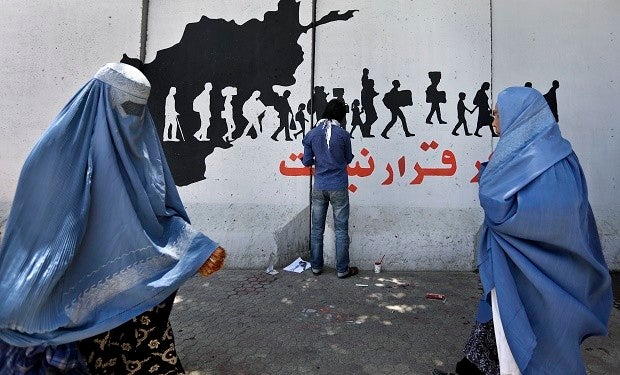 In this Wednesday, May 25, 2016 photo, Women walk past an independent Afghan artist painting graffiti on a wall with Persian that reads, “There is no peace in escaping,” built to cordon off the Ministry of Communications in Kabul, Afghanistan. With every terrorist attack in Kabul, a little more of what made Afghanistan’s capital a garden city of the 1960s disappears behind massive concrete walls designed to thwart suicide bombers and keep the people and buildings behind them safe. AP

Much of Artlors’ work is about eyes — huge painted eyes, male and female, that look down from the walls on the passing traffic and pedestrians. Some also have a warning, painted alongside: “God and the people are watching.”

For Omaid Sharifi, the Artlords founder, the murals are a way of beautifying the gray that dominates the cityscape.

“We wanted to ‘bring down’ these walls,” Sharif said. “We cannot do it with a shovel, the only thing we can do is use paint.”

Sediqi, the marketing manager of the blast wall factory, says Kabul seems to be running out of space for more walls.

“Everyone already has all the walls they need,” he said.

UN: Violations against children in conflict rose in 2015