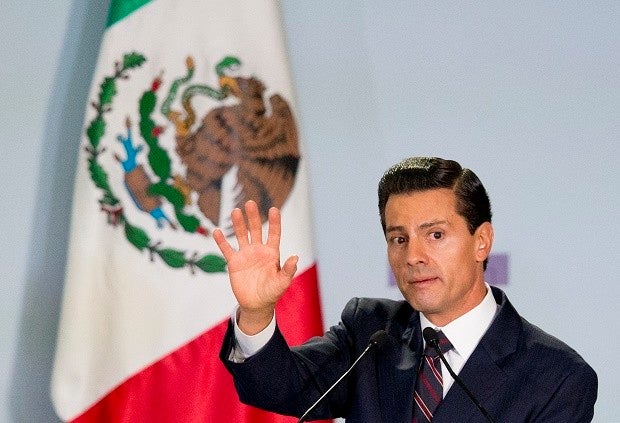 Mexican President Enrique Pena Nieto declares open the 8th National Forum for Security and Justice, after delivering his address in Mexico City, Tuesday, June 7, 2016. On the same day that Pena Nieto spoke at the forum, the international program Open Society Justice Initiative released a report saying the Mexican government has committed crimes against humanity in its war against drug cartels. AP

MEXICO CITY — The Mexican government has committed crimes against humanity in its war against drug cartels, human rights groups said Tuesday in pressing the government to take action.

The report released by the New York-based Open Society Justice Initiative is an extensive analysis of the toll of acts against humanity, which it defined as murder, torture and disappearances. It said that some of its Mexican partner organizations had already contacted the International Criminal Court in The Hague urging it to pursue cases.

The report also singled out the Zetas cartel, one of Mexico’s most violent gangs, for the seriousness of their crimes.

It called on Mexican authorities to further pursue cases in which serious atrocities committed by law enforcement and military personnel have not been fully investigated.

A government spokesperson did not immediately respond to a call seeking comment.

The Justice Initiative worked with five Mexican human rights groups on a three-year investigation and found that from December 2006 when the government declared war on the cartels through the end of 2015, more than 150,000 people were killed in Mexico and thousands have disappeared.

The most recent case that garnered international attention was the disappearance of 43 students in the southern state of Guerrero in September 2014.

Researchers also found that nine years after the Mexican government first deployed armed forces to combat, civilians have continued to suffer the most. These crimes are being carried out not only by the cartels, but also by federal and state security forces who are supposed to be protecting civilians.

“The Zetas have carried out a policy of territorial control through violence, which was used to gain the profits from other criminal organizations,” said James Goldston, executive director of the Open Society Justice Initiative, at a press conference. “They have attacked any person inside that territory, including migrants, who have nothing to do with a cartel. The Zetas qualify as an organization that can commit crimes against humanity, because they have a hierarchy, territorial control, and have the capacity to carry out an organized attack to civil populations, as they did in the past.”

In case there was any doubt about the Zetas’ power or brutality, state prosecutors in the northern border state of Coahuila said in a statement Tuesday that they had arrest warrants for five people for the disappearances of seven people between December 2009 and January 2012 in Piedras Negras.

In the case, Zetas in the prison allegedly had people brought to them from outside, killed them within its walls and then disposed of their remains or ashes in a nearby river. It’s also believed that there could be more suspects related to this case that may have escaped the penitentiary in 2012.

Authors of the report said they want such crimes prosecuted to the full extent of the law in Mexico, regardless of the perpetrators.

“No one can deny that atrocities have been committed in Mexico,” said Jose Antonio Guevara, executive director of the Mexican Commission for the Defense and Promotion of Human Rights, one of the groups that assisted in the investigation.