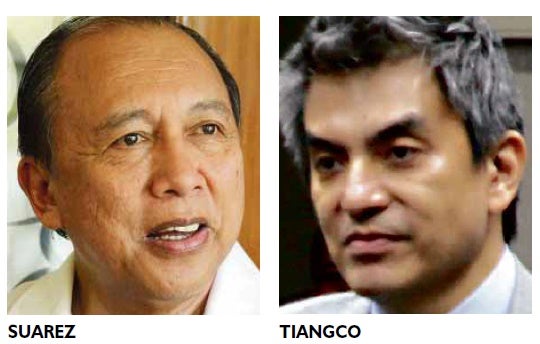 THE SCRAMBLE is on for the leadership of the losers.

United Nationalist Alliance (UNA) president Tobias Tiangco is eyeing to run as minority leader of the House of Representatives.

The Navotas City lawmaker said the race had become clearer with Speaker Feliciano Belmonte Jr. and the Liberal Party (LP) joining Partido Demokratiko Pilipino-Lakas ng Bayan (PDP-Laban) in the Coalition for Change in the 17th Congress.

“I definitely want to but we should have numbers and support of our members,” Tiangco said.

“We will be a productive and constructive minority,” Tiangco said.

Caloocan Rep. Edgar Erice, an LP member, said that the emerging scenario of President-elect Rodrigo Duterte taking virtual control of both the House and Senate was a “natural” outcome in a multiparty presidential form of government where legislators would gravitate toward a President who won overwhelmingly.

But Erice said it was important that a “real” and not just a token minority would be formed to provide as a check and balance to the majority and provide alternative thinking in Congress.

“I am sure, despite small in numbers, a real minority will emerge in both chambers,” Erice said.

Suarez, who is also an UNA leader, said he would meet with the presumptive Speaker, incoming Davao del Norte Rep. Pantaleon Alvarez, and Duterte to discuss their political alignment.

“We will be a constructive and cooperative minority,” Suarez told the Inquirer before meeting with Alvarez at the Marco Polo Hotel.

“I told (Alvarez) that I think we (in the UNA) are their best choice when it comes to the minority. In the first place, Binay and Duterte have already talked about it,” he added.

Asked what he meant by a “constructive and cooperative” political opposition, he said: “It means we will just delay the passage of proposed bills, but they would be eventually passed.”

After actively campaigning for Binay in the May 9 presidential race, Suarez was among the first who met with Duterte even before he was officially proclaimed as President-elect.

A former stalwart of the once dominant Lakas-CMD party, Suarez was among the trusted lieutenants of then President Gloria Macapagal-Arroyo in the 13th and 14th Congress.

He took the role of House minority leader when President Aquino’s LP became the ruling party after the 2010 elections.