Duterte: No media interviews until the end of my term | Inquirer News
Close
menu
search

Duterte: No media interviews until the end of my term 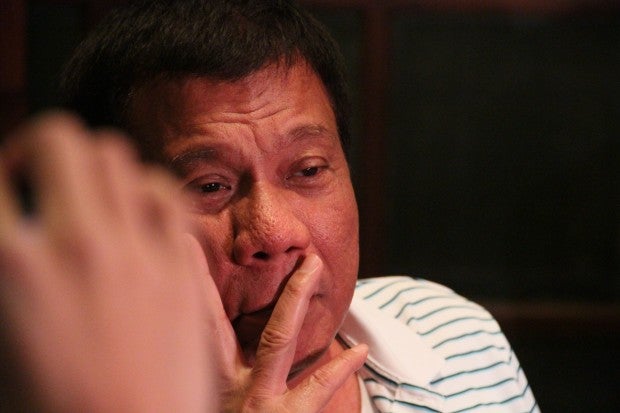 DAVAO CITY — President-elect Rodrigo Duterte said that he would no longer grant interviews until the end of his term, apparently firm on his decision to distance himself from journalists after drawing flak for his statement on media killings.

Asked until when he would boycott interviews, the Davao City mayor said it would be “until the end of my term.”

Instead, all statements of Duterte will be coursed through the government television network PTV-4.

The Paris-based Reporters Without Borders issued a statement last week to boycott the tough-talking mayor after he said that many journalists in the country had been killed because they were corrupt.

Duterte, in return, refused to apologize and also dared the media to stop covering him.

He also drew criticisms after catcalling GMA-7 reporter Mariz Umali in one of his press conferences last week.

At his victory party last Saturday, Duterte in his speech also criticized a  journalist for asking about his medical condition in a previous interview.

“How is the vagina of your wife? Is it smelly? Or not smelly? Give me the report. Bastos eh,” the mayor said, finding the question offensive.

He said the media were always asking “impertinent questions.” JE/rga