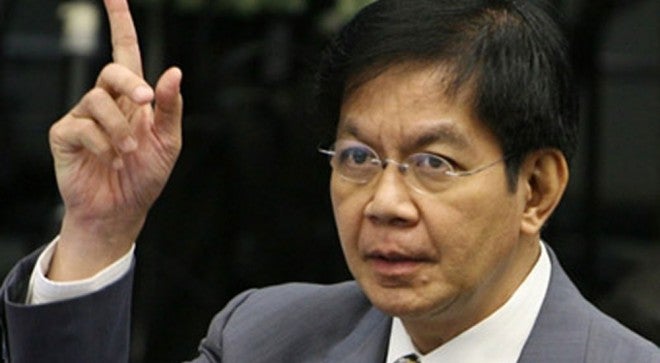 Reelected Senator Panfilo “Ping” Lacson warned on Monday that President-elect Rodrigo Duterte’s call on citizens to arrest and shoot suspected drug lords might escalate the peace and order problem in the country.

“While there’s a provision in the Revised Penal Code that allows citizen’s arrest and that self-defense is a valid legal defense to kill a person, the danger in the President-elect’s proposal is that law enforcement authorities might lose control of the situation since civilians are not trained to gather and process intelligence,” Lacson said in a text message.

“Having said that, the situation might escalate into a serious peace and order problem in the entire country,” he said. “Certainly, no peace-loving citizens need and deserve a ‘Wild, Wild West’ environment.”

The senator was reacting to Duterte’s call for citizens to arrest drug traffickers and shoot them if they resisted arrest and put people’s lives in danger.

“If he fights and fights to death, you can kill them,” the President-elect said during his thanksgiving party in Davao City over the weekend.

Lacson, who headed the Philippine National Police during the time of then President and now Manila Mayor Joseph Estrada, explained that validating a list of drug suspects and other criminal syndicates entailed an exchange of intelligence information or “intelligence workshops” among the different intelligence agencies.

The validation process, he said, also undergoes a careful and tedious process that leads to an Order of Battle (OB) list.

“Further, the OB is a classified document and declassifying it follows a defined procedure and timeline,” he pointed out.

Lacson said private citizens should be encouraged instead to report to authorities the presence of drug pushers and big time drug lords in their areas.

“And that is where the incentive of monetary reward should come into play,” he said. RAM/rga