DAVAO CITY—Boy Ocajo and his wife, Felicidad, just could not pass up the thanksgiving party thrown by President-elect Rodrigo Duterte on Saturday. They borrowed money ‘from their neighbors to be there.

“It’s not payday yet, so we borrowed P200 to come here,” said Orcajo, 65, a longtime canal cleaner for the city’s drainage management unit.

Wearing red Duterte shirts and caps, the couple was among the 200,000 people who turned up for the “DU31: One Love, One Nation” party at Crocodile Park, the most attended event in Davao City’s history, according to the police.

“We are very happy! We are die-hard fans,” said a beaming Orcajo, who has been supporting Duterte since 1988.

Felicidad, a barangay worker, said she expected Duterte to deliver on his promise of national change.

“He will bring about big change. He will rid the country of undesirables,” she said.

It was the first time that Duterte faced his supporters as President-elect. His victory had been fanned by a massive mobilization on social media, with many believing his strongman approach to crime and corruption could resolve the deeply entrenched problem.

Speaking in a mix of English and Cebuano, Duterte thanked his supporters for carrying him to Malacañang.

He also laid down his plan of government, including a merciless campaign against corruption and drugs, and allocating  more funds for health and education.

“It’s the first time that someone from Mindanao has become President. His mission is to change the country,” said Thelma Padayogdog, among a party of 11 relatives who came together to the party.

Everyone in the group wore Duterte shirts, some in white, others in black.

For Padayogdog’s niece Leah Jacob, it was the third time to attend a gathering for Duterte, having joined campaign rallies in support of the longtime mayor.

“Now, it’s a happy time. In gatherings before, we were just fighting to defend him. But now, it’s to celebrate his victory,” Jacob said.

Though not yet voters, first cousins Cathy and Darlene Pilapil have long idolized Duterte, admiring his fierce stand against corruption. They wore matching black Duterte shirts to  the party.

“He has been my idol during his time as mayor. When he becomes President, he will fight criminals even more and help the children more,” Cathy, 17, said, adding that Duterte often held feeding programs in schools in the city. 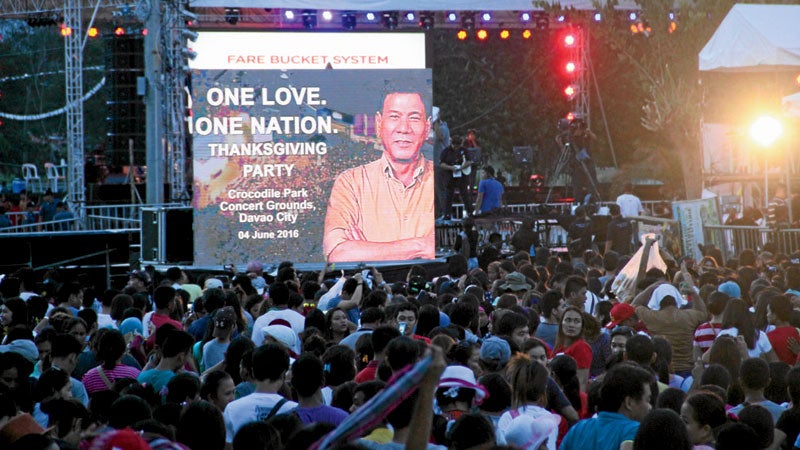 ASTREAMER with a picture of President-elect Rodrigo Duterte greets supporters who gathered for a night of
entertainment at an open but tightly secured field at Davao City’s Crocodile Park. DENNIS JAY SANTOS/INQUIRER MINDANAO

Asked what they thought of the mayor’s foul language and flirtation with women, the cousins said almost simultaneously, “That’s normal for him.”

“But he said he would change,” Cathy said, referring to the mayor’s promise of a “metamorphosis”—cleaning up his language and actions—after his inauguration on June 30.

More than 4,000 security personnel were deployed to the park grounds, 1,500 of them policemen, for the party. The rest came from the military and civilian volunteer groups.

A team from the National Bureau of Investigation was also spotted roving the grounds.

No untoward incident was reported, but emergency crews responded to 45 cases of fainting and shortness of breath, and four hypertensive patients and minor lacerations, said Chief Insp. Milgrace Driz, spokesperson for the Davao Police Office.

Journalists were initially barred from covering the event close at the stage, with organizers citing security reasons.

Earlier, broadcast networks were allowed to set up equipment at both sides of the stage, but the permission was withdrawn on Saturday morning.

Duterte shirts of different prints and colors were sold at several stalls on the park grounds.

When it cooled, people spread mats on the grass and stretched out, as if to reserve their energy for the rest of the night. The party, which started at 1 p.m., was scheduled to end at 1 a.m.

The party was an entirely volunteers’ event, organizer Kat Dalisay said in interview.

All entertainers—630 from Davao and 30 from Manila—performed for free, she said.

But an estimated P2.8 million donated by Duterte’s supporters was spent to pay for the entertainers’ airfares and accommodations, she said. With a report from Frinston Lim, Inquirer Mindanao