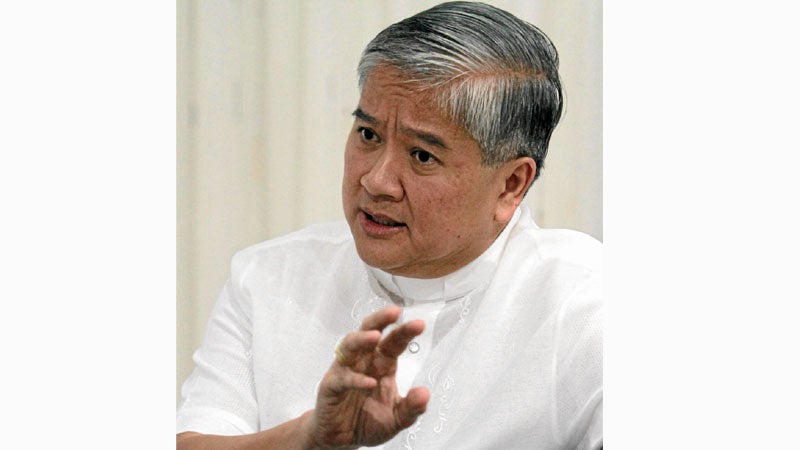 VILLEGAS: Wisdom is knowing when it’s time for silence or speech. NIÑO JESUSORBETA

“MINE is the silence of respect for those who consider us their enemies but whose good we truly pray for and whose happiness we want to see unfold.”

Lingayen-Dagupan Archbishop Socrates Villegas on Sunday broke his silence by issuing a statement underscoring the virtue of silence amid the vitriol spewed against the Catholic Church by incoming President Rodrigo Duterte.

Duterte has described the Catholic Church as “the most hypocritical institution” and called the bishops “sons of bitches.”

The foul-mouthed President-elect has also said that some bishops are corrupt, asking favors from politicians, including him.

In his statement titled “Understanding Silence,” Villegas said there was “nobility in silence” and that silence should not always be interpreted as “fear of the cowards.”

While the statement appeared to explain why the Church hierarchy chose to be quiet in the face of the latest attacks  against the Catholic Church, Villegas on Sunday told the Inquirer in a text message that he was making the statement as a Filipino who wanted to help his fellow Filipinos “discern substance from noise.”

In his statement, he asked: “Are we still at ease with silence? Has the noise of violence and terror drowned the voice of quiet conscience? Do we always interpret silence as fear of the cowards; the destiny imposed on the unwilling mute; the refuge of the guilty?”

Silence of the lambs

“Silence indeed is the language of God and only those who speak silence will be able to grasp Him,” Villegas said.

Months before the May 9 elections, Villegas encouraged the faithful to seriously think about the kind of leadership Duterte would offer the country after the Davao mayor, during his proclamation rally, cursed Pope Francis for the heavy traffic triggered by the papal visit in January last year.

Villegas said vulgarity was also a form of corruption. “When we find vulgarity funny, we have really become beastly and barbaric as a people,” he said in a strongly worded statement in December.

The last statement he made concerning Duterte was in April after the longtime mayor made a joke about an Australian lay missionary who was raped and killed during a prison riot in Davao City in 1989.

In his Facebook post, Villegas shared a link of the controversial video clip of Duterte and asked Filipino voters to judge for themselves whether Duterte was the right choice for the presidency.

In a news conference last month, Duterte questioned the relevance of Catholic bishops, noting his overwhelming victory in the national elections despite their efforts to sway Filipinos against voting for him.

Aside from accusing some bishops of corruption, Duterte threatened to start naming bishops who got married or have women, saying that the Church “will explode” if he makes public their wrongdoing.