DAVAO CITY — Around half a million people joined President-elect Rodrigo Duterte on Saturday evening in his grand victory party at Davao Crocodile Park, according to the police.

Police Chief Insp. Milgrace Driz, spokesperson for the Davao Police Office, told INQUIRER.net that “more or less 500,000” people trooped to the event (as of 9:30 p.m.) to attend the concert and hear Duterte speak.

Driz said their estimates were based on the land area occupied by the attendees. The number of people at the venue swelled from 180,000 to 300,000 and finally 500,000 in several hours, the local police said.

The Davao police spokesperson earlier said that half of the Crocodile Park’s 100-hectare area had been opened for the thanksgiving event.

Several of Duterte’s incoming Cabinet members and allies were also spotted at the VIP area.

Senator Alan Cayetano, who was Duterte’s runningmate in the elections, said the President-elect was excited to face the people of Davao City. 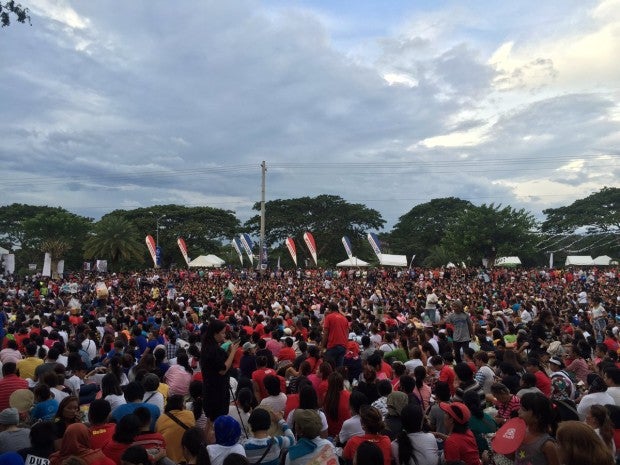 During his speech, Duterte encouraged the public to turn in drug lords or pushers in exchange for a bounty.

He also warned three police officials to quit. At one point, he talked about his complicated relationship with the media.

Cayetano and Duterte’s son Baste also faced the crowd to give speeches.

Driz said the local police enforced a number of security precautions to prevent untoward events. There were three frisking checkpoints while police officers in plain clothes were also deployed.

The public was prohibited from bringing umbrellas, ballpens and other sharp objects.

There were no reported incidents of pickpocketing but there were 45 cases of “fainting and shortness of breath.”/rga