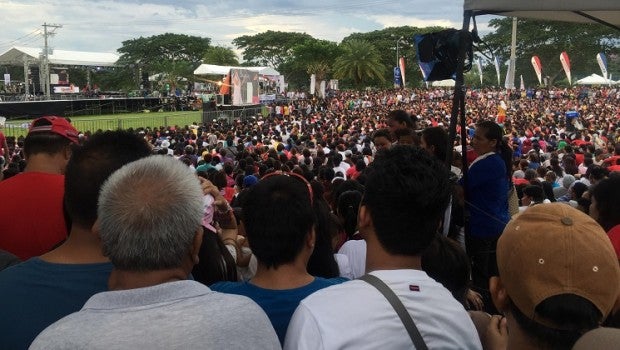 “More or less estimated natin ay 180,000 na ang andito based on the land area na na-occupy nila,” Driz said at around 6 p.m., describing the crowd which swelled to around 300,000 two hours later.

The Davao Crocodile Park is 100 hectares and half of the area was allotted for the event, which is expected to draw more people.

The police officer said a lot of people were still entering the grounds. Around 25 hectares of the venue is now filled with people.

She said no illegal drugs or firearms have been confiscated, only umbrellas and ball pens.

Those attending the event are subjected to three frisking checkpoints. Police officers in plain clothes were also deployed.

Driz reminded the public to bring transparent bags to make it easier for authorities to check their belongings.

She also asked the people to be vigilant and follow the safety rules.

Driz said there had been no incidents of pickpocketing.

The public is encouraged to report suspicious behavior or incidents by contacting Dial-911.