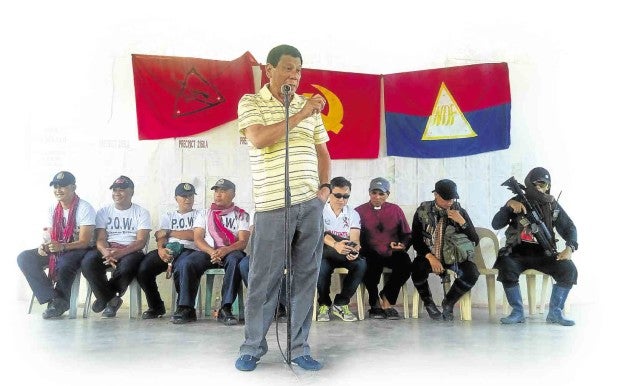 PRESIDENT-ELECT Rodrigo Duterte is no stranger to communist guerrillas taking captive government troops. At ceremonies during the release in April of five police officers taken as “prisoners of war” by the New People’s Army, Duterte was the official picked by the rebels to receive the captives. INQUIRER PHOTO

DAVAO CITY—President-elect Rodrigo Duterte has changed his tune on the captivity of a police officer who was abducted by communist guerrillas during a raid on the police station of Governor Generoso town in Davao Oriental province.

A day after appealing to the rebels to free Chief Insp. Arnold Olgachen, Duterte said he was now asking the rebels to proceed with the trial of Olgachen for supposed crimes against the people.

This came after the New People’s Army (NPA), the armed component of the Communist Party of the Philippines, claimed in a statement that the guerrilla raid on the police station of Governor Generoso was part of an antidrug operation.

The statement, quoting rebel spokesperson Rigoberto Sanchez, also claimed that a packet of the illegal drug “shabu” was found in the possession of Olgachen when he was abducted during the raid on May 29 indicating the police chief’s involvement in the illegal drug trade.

Sanchez, NPA spokesperson in Southern Mindanao, said the NPA conducted the raid after receiving persistent reports that Governor Generoso, a coastal town, had become the entry point of drugs in Davao Oriental and that top provincial officials were protecting the illegal trade.

After learning about the NPA claim, Duterte retracted his earlier call for the rebel group to release the police officer.

“I’m sorry for that guy. I leave his fate to the NPA,” Duterte said.

Duterte also said the NPA should try Olgachen in its revolutionary courts and sentence him to 10 years of hard labor.

In the NPA statement, Olgachen said the NPA took action because local officials in Davao Oriental had done nothing about the drug problem in the province.

“Davao Oriental Gov. Cora Malanyaon and Congressman Nelson Dayanghirang know well of the prevalence of illegal drugs in their province,” said the statement.

“Their silence and inaction on this widespread problem only confirm the masses’ belief in the reactionary officials’ unholy alliance with drug syndicates,” Sanchez said.

But Malanyaon, in a statement issued on Thursday night, denied the allegation.

“There’s absolutely no truth to insinuations that my silence and inaction on the alleged rampant drug trafficking in Governor Generoso constitute an unholy alliance with drug syndicates in the province,” said Malanyaon.

“Such insinuation is grossly unfair and baseless,” she said.

“You can fault me for anything but not illegal drugs. Heaven knows how I have passionately spearheaded a campaign against illegal drugs,” the outgoing governor added.

Dayanghirang has yet to issue a statement on the matter.

Sanchez said Olgachen was being accorded “prisoner of war” treatment while being investigated by the  NPA. Nico Alconaba, Inquirer Mindanao