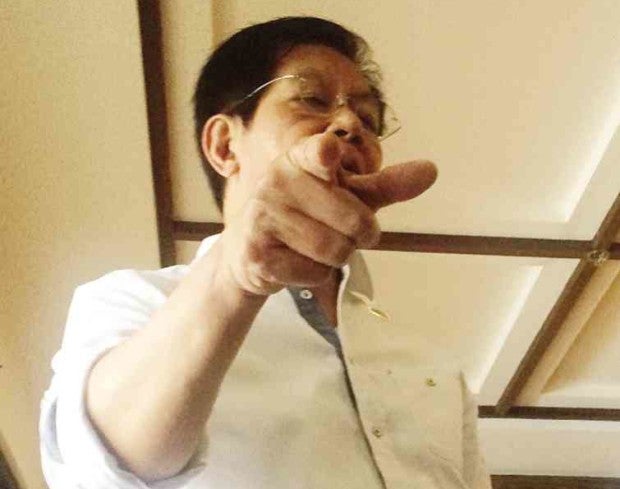 Comebacking Sen. Panfilo Lacson is ready to support President-elect Rodrigo Duterte’s war on drugs, going so far as to donate his unspent campaign funds toward the bounty law enforcers would be paid when they capture or kill drug suspects.

“Whatever it takes to take down the scourge of illegal drugs,” Sotto said in text message.

Duterte spelled out on Tuesday night his strategy for curbing the drug menace in the country in six months.

He said he would put up the remainder of his campaign funds as a bounty for police and military officials who neutralize drug suspects “dead or alive.”

Targets will include antinarcotics agents involved in the illegal drug trade and imprisoned drug lords who continue to run their operations from behind bars, Duterte said.

Resist and be killed

Suspects who put up resistance during their arrest would be killed, while those who raise their hands in surrender would be spared, he added.

He said there was enough left over from his campaign funds “for 100 persons dead.”

In a text message, Lacson, who was a senator from 2001 to 2013 and won a seat again in the May 9 elections, said Duterte’s strategy was a “clear demonstration of his determination to end a scourge that has grown to alarming proportions in recent years.”

“Provided the law enforcement authorities do not go beyond the rule of law in carrying out his marching orders… I am in full support of his approach to accomplish what he promised before he was elected and now that he is waiting to be sworn into office,” said Lacson, who was Philippine National Police chief in the Estrada administration in 1999-2001.

But he stressed that the police should not be motivated by the reward to do their job, “but solely by an unequivocal compliance with the President’s directive, not to mention their mandate to perform their sworn duty to protect the people and maintain a peaceful and orderly society.”

“I myself am willing to contribute from whatever unspent campaign contributions I still have to his pool of funds if only to underscore the importance of a concerted all-out war against drugs,” Lacson said, adding that he would check how much money he still had with his campaign finance officer.