‘Don’t fuck with me,’ he tells media 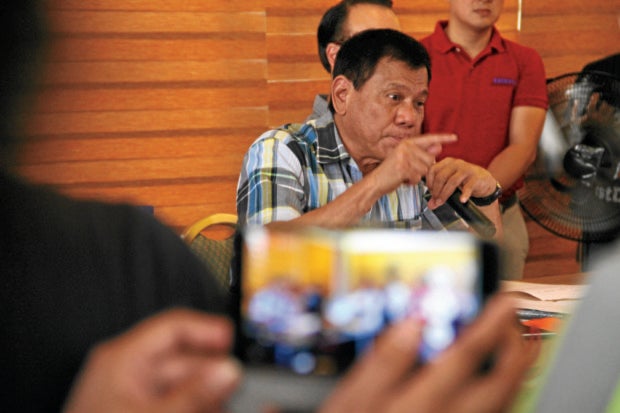 DAVAO CITY, Philippines—Saying journalists “think too much of themselves,” President-elect Rodrigo Duterte on Thursday lashed out at the media, and told those who were calling for a boycott of his press conferences not to cover him.

Asked later for clarification, Duterte backtracked and said he did not mean to say the country, but stop coverage in his city in response to the boycott call by the international journalists’ group, Reporters Without Borders.

“I cannot stop you,” Duterte said.

“I was saying, you idiots, do not threaten me. I said I’m ready to lose the presidency, my honor or my life. Just do not fuck with me,” Duterte said.

Amid an international backlash over his remarks justifying the killings of corrupt journalists, Duterte expressed no remorse.

“Go ahead, boycott me. I’m urging you: Make this trip your last to Davao City. I do not care if no one is covering me,” he said.

“I’m telling the networks, do not come here. I do not need you… I would ask the Cabinet to avoid you,” he added.

He told reporters to just cover him through the state television network, or a website where his administration would post information.

The President-elect was apparently incensed at global criticism that he had drawn for his statements on Tuesday night, when he said one journalist was killed not because of his profession, but because he was corrupt.

His camp said on Wednesday that his statements were misinterpreted, and that he was not justifying the killings of corrupt journalists.

Duterte laid down his classification of journalists: the “crusaders, who bare all to the public,” the “mouthpiece of vested interests,” and “the lowlives.”

Saying he had been “very careful” about his statements, Duterte refused to apologize for citing the case of Jun Pala, the journalist killed in Davao City in 2003.

“No apologies. Bullshit,” he said.

He hit corruption in journalism, telling the reporters, “It’s about time we bared each other. Let us not deny each other the truth.”

“Almost everyone is asking. I just don’t want to talk. All,” he said, adding that he himself had given money and favors to journalists.

Duterte to journalists: Do not cover me