NPA says raid on town part of war on drugs 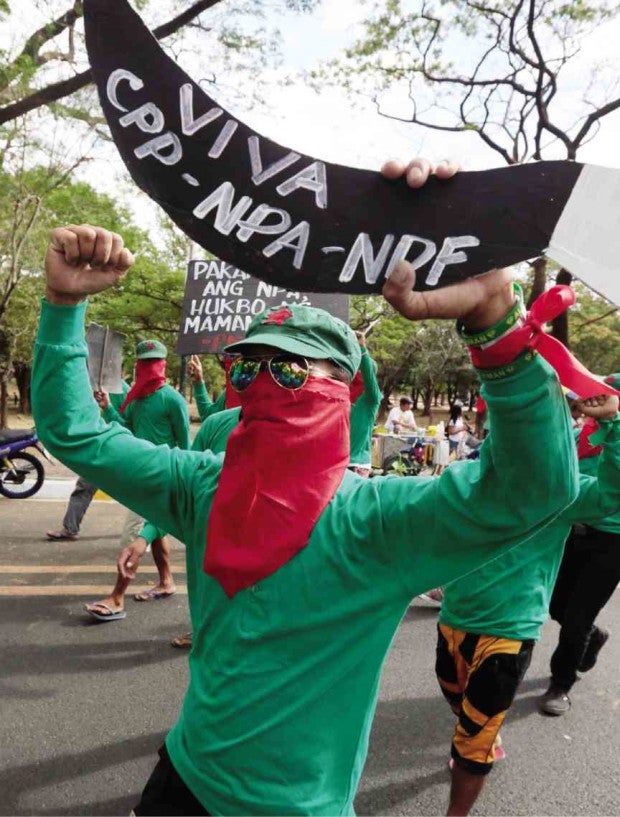 UNDERGROUND leftist cadres march in Quezon City on March 29 to celebrate the 47th founding anniversary of the New People’s Army, which has gone on an offensive in the last remaining weeks in office of President Aquino. GRIG C. MONTEGRANDE

DAVAO CITY—In the wake of President-elect Rodrigo Duterte’s marching order for law enforcers to wage a brutal campaign to end the drug menace, communist guerrillas on Thursday said the attack it mounted on Governor Generoso town in Davao Oriental province was actually an antidrug operation.

The guerrillas took captive the town’s police chief during the attack.

Rigoberto F. Sanchez, spokesperson of the New People’s Army (NPA) in Southern Mindanao, said the raid was conducted after the NPA received persistent reports that the coastal town had become the entry point of illegal drugs in the province and that the illegal trade was being protected by authorities.

“The NPA targeted the municipal police station based on the people’s popular demand to punish the protectors of rampant drug trafficking in the area,” Sanchez said in an e-mailed statement.

The guerrillas also took off with 11 firearms from the town police’s armory.

Sanchez said the NPA took action because local officials had done nothing to stop drug trafficking in the province.

“Their silence and inaction on this only confirm the masses’ belief in the officials’ unholy alliance with drug syndicates,” said the NPA statement.

Sanchez said the NPA had planned to raid a “shabu” laboratory in Governor Generoso but the military intervened.

Sanchez said Olgachen was being treated as a “prisoner of war.” He said “medical officers of the Red army have assured his (Olgachen’s) good health.”

He warned the military or police against trying to rescue Olgachen, saying this would endanger the police officer’s life.

Duterte has urged the rebels to free Olgachen.

“May I ask them, now, if they are listening, release the chief of police,” he said on Tuesday.

“If he has not done anything wrong, release him immediately,” Duterte added.

Duterte also said he was willing to pick up Olgachen in rebel territory.

He said he did not consider entering rebel camps as a security nightmare for the Presidential Security Group (PSG), which has started securing him. “They (PSG men) could tag along if they want,” he said.

Duterte said he was confident that the NPA would not harm his security escorts.

He said he had always taken his security escorts with him in the past when he entered rebel camps to pick up captives being released.

“Nothing happened to them. They even posed (for pictures) with the rebels,” Duterte said. Karlos Manlupig, Inquirer Mindanao