Shake up in PNP leadership ahead of Duterte presidency 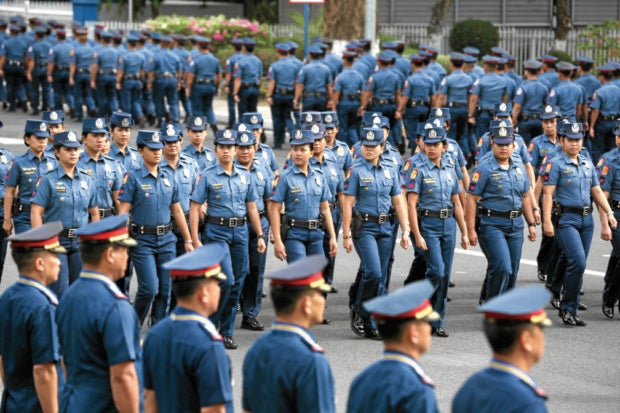 Less than a month before the Philippine National Police welcomes its new chief, a reshuffle of senior officers holding sensitive posts has been implemented by its outgoing chief Director General Ricardo Marquez.

In a press briefing on Thursday, PNP spokesperson Chief Supt. Wilben Mayor said the retirement of some senior officers prompted Marquez to implement the reorganization.

But once Duterte’s appointee, Chief Supt. Ronald “Bato” dela Rosa, takes over the highest PNP post, Mayor said he has the power to designate the reshuffled officers to different PNP offices.

Among those who were transferred to different posts were Chief Supt. Ronald Santos and Chief Supt. Elmo Sarona. Santos, formerly the deputy regional director for administration for Calabarzon Regional Police, was one of the four generals who came under fire after journalists spotted them in a confidential meeting with a staff of defeated presidential candidate Mar Roxas last April.

Sarona, meanwhile, was recently relieved as the Firearms and Explosives Office (FEO) chief after a criminal case was filed against him and 14 other cops over the alleged anomalous issuances of the firearms licenses.

Effective June 1, Santos will be reassigned as officer-in-charge and deputy director of the Civil Security Group (CSG) while Sarona will be the Metro Manila police’s third in command as  deputy regional director for Operations of the National Capital Region Police Office (NCRPO).

Other officers affected by the reorganization are the following:

The new designations were also recommended by the Senior Officers Procurement and Promotion Board (SOPPB). TVJ/rga