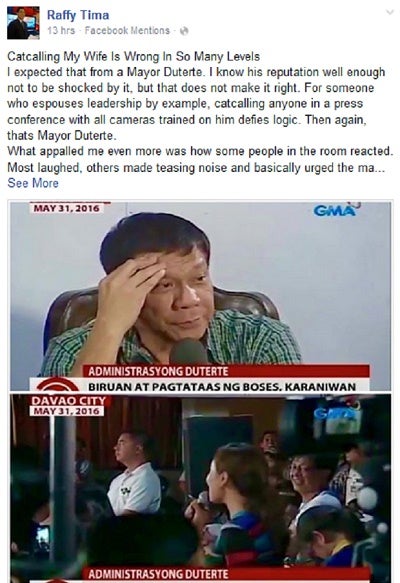 GMA 7 reporter Mariz Umali on Thursday said she was shocked by President-elect Rodrigo Duterte catcalling her during a televised press conference, an act  she said “may have been improper” for an incoming Chief Executive.

Umali, in an interview with her home network, said she was not expecting any apology from the brash-talking  mayor.

“I must admit na talagang nakakagulat na mayroong ganoong statement or may ganoong (it is shocking that there was such a statement or there was such an) actuation from the President-elect himself, pero (but) I continue to concentrate on my question kasi nga maingay, may nagtatawanan, may nambubuyo, may nang-aasar, tapos meron na ring gustong magtanong (because it was noisy, some were laughing, others were teasing and some wanted to ask questions). So I have to get my answer, that’s why I stood my ground and then talagang nilakasan ko ‘yung boses ko na (I spoke louder and said) ‘Sir, can I get my answer?’” she told fellow GMA reporter Kara David in an interview over “News To Go.”

Umali, who stayed at the back of the press conference during a live broadcast, explained that she needed to get Duterte’s attention to allow the President-elect to see where the question was coming from, as other journalists were also eager to raise their queries.

(To get President-elect Duterte’s attention, you had to speak louder or raise your hand, so that was what I did because everyone else raised their hands and wanted to ask questions. When he heard my question, the first part of my question, I noticed that he didn’t know where the voice was coming from.)

(So I just told him na ‘Sir, I’m here’ in the middle of my question so that he wouldn’t bother looking where the voice was coming from. That was when he said I was really trying to get his attention, he whistled and later on sang.)

Umali said the press conference did not follow a certain order of reporters who would be asking questions, adding that newly appointed presidential spokesperson Salvador “Sal” Panelo was supposed to moderate the affair.

(Even if you raise your hand, you won’t be called next. There was no list of order. In the past I’ve been covering the previous presidents and we have seen that there was a certain order as to who will ask questions to avoid shouting and disorder. Pero during that time there was no order yet.)

Umali said no one from Duterte’s camp approached her following the incident and that she was not expecting an apology.

She said she was trying to understand Duterte’s personality and manner of speaking, vowing to continue doing her job and maintain her composure no matter what the situation is.

“Inisip ko na lang na I must understand na talagang palabiro lang itong si President-elect Duterte, based from how I know him o kung ano ‘yung mga alam ko dun sa mga coverages sa kanya ng ibang reporters (I just keep in mind that I must understand that President-elect Duterte would like to throw jokes, based from how I know him o what I know about the coverages of him by other reporters). So minaintain ko na lang ‘yung composure ko (So I maintained my composure), tried to understand what the situation was, and tried to get my answer, which I did,” Umali said.

(I am trying to understand it because during our coverages, he admits he is just like that. He even said in jest in the previous press conference that perhaps God is not perfect because He created him that way. He also said that if he changed, he would no longer be Rodrigo Duterte.)

Umali’s husband and fellow GMA reporter Raffy Tima took to Facebook to express his disappointment over Duterte publicly disrespecting her.

“I expected that from a Mayor Duterte. I know his reputation well enough not to be shocked by it but that does not make it right. For someone who espouses leadership by example, catcalling anyone in a press conference with all cameras trained on him defies logic. Then again, that’s Mayor Duterte,” Tima wrote.

In the same press conference, the President-elect said journalists were being killed because they were corrupt. YG/RAM/rga