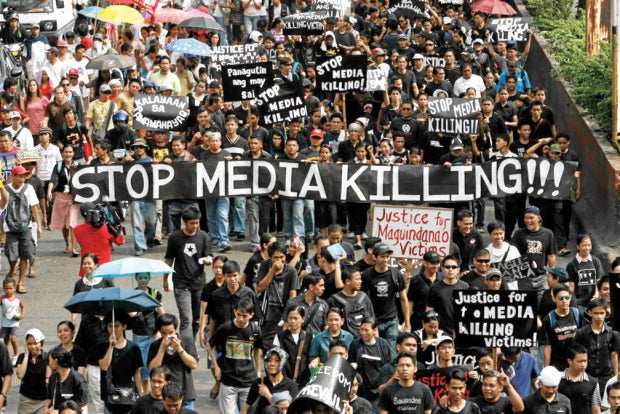 President-elect Rodrigo Duterte’s endorsement of killing corrupt journalists has sparked public outrage, fueling fears that it could incite more murders in a nation already listed as one of the world’s most dangerous for reporters.

“Even if you’re a journalist, you are not exempted from assassination if you’re a son of a bitch,” Duterte told reporters in Davao City on Tuesday when asked how he would address the problem of media killings in the Philippines after a reporter was shot dead in Manila last week.

He said there was justification for killing journalists who took bribes or engaged in other corrupt activities, but “if you are an upright journalist, nothing will happen to you.”

The National Union of Journalists of the Philippines (NUJP) said it was appalled by the Davao mayor’s comments justifying media assassinations by “playing the corruption card.”

Ryan Rosauro, NUJP chair, said in a statement that while the group recognized corruption as one of the most pressing problems facing the Philippine press, “it is one thing to recognize a possible reason for murder; it is a totally different thing to present this as a justification for taking life.”

“Duterte tries to explain his thesis by claiming assassination is retribution from private individuals unjustly pilloried by errant journalists. He could not be farther from the truth,” Rosauro said.

“While there may be instances where private individuals may have sought revenge against journalists for soiling their reputations, the data show that of the handful of media killings that have actually made it to the courts, the accused are invariably from the government—elected officials, government executives or members of the security services—and invariably accused of corruption,” he said.

“We also stress that journalists were killed because of their work in exposing corruption and malfeasance in the government. Hence, no matter the weaknesses of Philippine media, it will be a major factor in any effort to cleanse the government of the scourge of graft and corruption,” he added.

The NUJP cited some of the most prominent cases, such as the murders of Edgar Damalerio of Pagadian City, Marlene Esperat of Tacurong City, and Gerry Ortega of Puerto Princesa City, and, the “most heinous of all,” the Nov. 23, 2009, massacre in  Maguindanao province, where 32 of the 58 victims were media workers.

At least 75 journalists have been killed since 1992, making the Philippines the second-deadliest country for journalists, according to the New York-based Committee to Protect Journalists (CPJ).

“What he (Duterte) has done with these irresponsible comments is give security officials the right to kill for acts that they consider defamation,” the CPJ’s Southeast Asian representative, Shawn Crispin, told Agence France-Presse from Bangkok.

“This is one of the most outrageous statements we have ever heard from a president in the Philippines,” Crispin said.

Malacañang reminded Duterte that “it is the duty of the government to arrest, prosecute and punish those responsible for violence against members of the media.”

“We recognize the vital role played by journalists as purveyors of information in a democratic society. As citizens, they have a fundamental right to due process and equal protection of the laws of the land,” Presidential Communications Secretary Herminio Coloma Jr. said in a statement.

“Hence, we deplore the proposition that some journalists may have been assaulted or killed in view of their alleged involvement in media corruption,” Coloma said.

The Center for International Law (Centerlaw), a nonprofit dedicated to the promotion and free expression in the Philippines and Asia, said Duterte’s remark “will only serve to embolden, rather than deter, those who kill without compunction.”

“He only shows a cynical attitude toward what is a serious concern to the international community and a scourge to any society founded on democratic ideals,” said Centerlaw executive director Romel Regalado Bagares.

In a statement, the Center for Media Freedom and Responsibility said Duterte “was correct in saying that irresponsible, biased, paid-for reporting and comment do lead to a journalist’s being killed. But the killing of anyone is nevertheless still a crime, and it doesn’t matter whether the victim is a journalist or not.”

Francis Allan Angelo, president of the Iloilo Press Club, described the mayor’s statement as “crass and irresponsible, to a point that it could be interpreted as an overt approval of media harassment and killings.”

“Many of the slain journalists were only doing their jobs and died fighting for just cause. And even if they did something wrong, they do not deserve to be killed,” said Glenda Sologastoa, NUJP-Iloilo president.

Vicky Arnaiz, vice president of NUJP-Leyte, said the statement was shocking and could be used as a license to silence and kill members of the media.

“We are in for silencing the media. President-elect Duterte’s statement could incite more murders. Any assassination is not justified. It’s an atrocious statement coming from a president against the media,” Arnaiz said.

In Puerto Princesa City in Palawan province, relatives of a slain broadcaster said they were “shocked” by the statement.

“Doc Gerry Ortega was killed for his courage and integrity. He was murdered precisely because he was honorable,” his daughter, Michaella, said in a statement issued by his family.

Reynafe Momay-Castillo, whose father was one of the 32 journalists killed in the Maguindanao massacre in 2009, said on a Facebook post: “My dad was not a corrupt journalist. He was killed along with 31 other journalists by just merely covering an election-related [activity]. It is unfair to be branded as such. They were brutally killed.”

Reporters Without Borders (RSF) on Wednesday expressed outrage over Duterte’s comment on journalists, and urged the media to boycott his press conferences and take legal action against him.

“Not only are these statements unworthy of a president but they could also be regarded as violations of the law on defamation or even the law on inciting hatred and violence,’’ said Benjamin Ismail, head of RSF’s Asia-Pacific desk.

Duterte should “be pleased by the existence of these laws because without them he would also be exposed to violent repercussions, according to his own words,’’ he added.

“We urge organizations that represent the media to not overlook comments of this kind and to bring lawsuits. We also urge the media to boycott the Duterte administration’s news conferences until the media community gets a public apology.’’  With reports from Nikko Dizon, DJ Yap and Marlon Ramos; Germelina Lacorte, Inquirer Mindanao; Redempto D. Anda, Inquirer Southern Luzon; Nestor P. Burgos Jr. and Joey A. Gabieta, Inquirer Visayas; and AFP