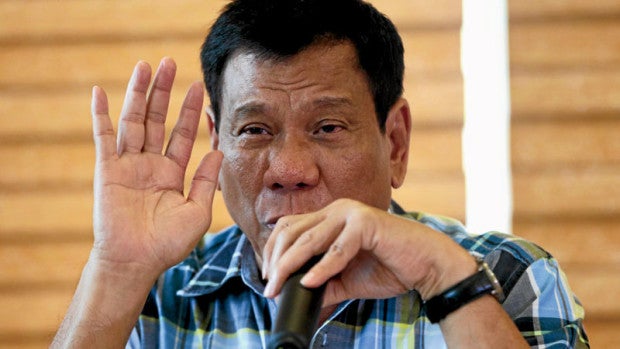 DAVAO CITY – President-elect Rodrigo Duterte on Tuesday said his choices for his Cabinet are people of “integrity” and were not merely  handpicked from his circle of peers.

In his first press conference as recently proclaimed president-elect held at the presidential guest house in Barangay Panacan, Duterte defended his official family from criticism that this was his version of “kaibigan, kaklase, ka-probinsya.”

Critics said Duterte appointed to the Cabinet his close peers, classmates and officials in Davao City where he served as mayor for over two decades.

Coming to their defense, the incoming President said his classmates he appointed to the Cabinet were all “valedictorians.”

“A Cabinet member is an alter ego of the president. So he must be one whom I trust, whom I’m confident that I could work well,” Duterte said.

“Sinasabi nila, kababayan, kasama, kabarkada. No, they are not, hindi ko kabarkada. Why? Probinsyano ako. Ang sphere of comfort is in Davao City… I can only pick the membership of the Cabinet from a small area,” he added.

Duterte said there was no selection committee and the members of the Cabinet he presented on Tuesday were handpicked by him.

“I assure you that these are all men of integrity,” Duterte said.

Duterte earlier drew criticisms for choosing Cabinet members whom he had a debt of gratitude (“utang na loob”) and shutting  Vice President-elect Leni Robredo out of his official family.

In the press conference, Duterte said there was no “compelling reason” for him to give Robredo a Cabinet post, because he does not want to offend his friend Sen. Bongbong Marcos, who lost in the vice presidential race to Robredo.

Robredo had wanted a post in the National Anti-Poverty Commission or the Department of Social Welfare and Development to streamline the anti-poverty efforts of government.