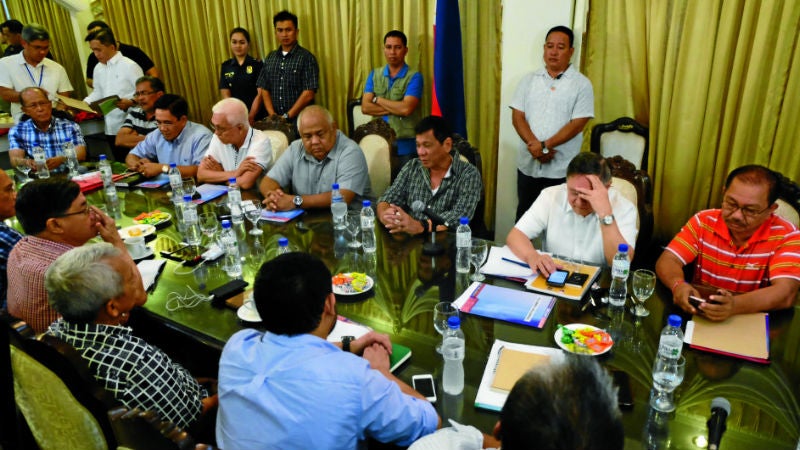 DAVAO CITY—Saying he chose people “with integrity and honesty,” President-elect Rodrigo Duterte on Tuesday presented members of his Cabinet for the first time, a “hardworking” roster he handpicked to address his top governance priorities such as red tape, corruption and crime.

Emerging from a three-hour meeting at the presidential guesthouse here, Duterte announced new appointees to critical positions in the security cluster.

“It’s not a simple job looking for the composition of the Cabinet.  I am reminded of the man holding a lamp during daytime. He was asked why are you bringing a lamp in the daylight when you can see everything? The man said ‘because I am looking for an honest man,’” Duterte said in an evening press conference.

“It took me several days. When I’m not around the public eye, it’s because I’m reviewing papers of recommendees, and I can assure you that we are all men of integrity, honesty,” he said.

He said none of his appointees were “tainted.”

Among Duterte’s new appointees are former South Cotabato Gov. Ismael Sueño as interior secretary, and retired Maj. Gen. Delfin Lorenzana, who heads the Office of Veterans Affairs at the Philippine Embassy in the United States, as defense secretary.

National Bureau of Investigation’s Davao regional director, Dante Gierran, was  promoted head of the agency,  while lawyer Cesar Dulay was appointed head of the Bureau of Internal Revenue (BIR). Martin Delgra was named head of the Land Transportation, Franchising and Regulatory Board (LTFRB).

Duterte also formalized the appointments of two leftists recommended by the National Democratic Front of the Philippines: former sectoral representative and current Kilusang Magbubukid ng Pilipinas chair Rafael Mariano to the Department of Agrarian Reform, and former political prisoner and associate professor Judy Taguiwalo to the Department of Social Welfare and Development.

Duterte said he would not meddle with his appointees’ work and allow his Cabinet to work, joking: “They go ahead and work. I just go sleep. It’s not easy to campaign, you know.”

Duterte has yet to make appointments to the health, trade, tourism and environment departments, but said that his Cabinet will be “inclusive,” even looking at appointing one from the Moro sector.

While he preferred to work only starting 1 p.m., Duterte said his Cabinet would stick to regular office hours.

“I won’t micromanage. They just have to answer me when there’s trouble,” he said.

“I will really level the playing field.  I will not meddle.  I just want that people won’t have anything to complain about,” Duterte said.

But, he said, he will make “some recommendations.”

For instance, he said, he wants to get rid of lines in government agencies. That people have to queue to get government services is “abusive,” Duterte said. “That’s how miserable the Filipinos are.”

“I don’t want to be heroic here, I just want honesty and good faith in dealing with the public,” he said.

He repeated his vow to get rid of corruption, saying such abuse is a fact in the PNP, BIR, BOC,

LTFRB and the Department of Public Works and Highways.

“The people don’t like [corruption] anymore. And they have shown it through their votes,” Duterte said.

That more than 16 million Filipinos voted for “just a mayor of a small city in Mindanao” known for his staunch stance against crime and corruption is a sign that people are fed up with corrupt officials, he said.

“It could only mean one thing: There’s a message there, that people really do not want corruption, they do not want their money being put inside pockets of workers in government,” he said.

Duterte said he would be “harsh against corruption,” and that he planned to ask the Supreme Court to stop the practice of temporary restraining orders.

Duterte again reiterated that he remains “noncommittal” to a possible appointment for Vice President-elect Leni Robredo, baring for the first time that his deference to defeated vice presidential candidate Ferdinand “Bongbong” Marcos Jr. is part of the reason.

“There’s really none… There’s no compelling reason. I know Bongbong Marcos. He is my friend. I don’t want to hurt him,” Duterte said.

Duterte’s father, Vicente, was an appointee of the senator’s father, the late dictator Ferdinand Marcos.  With a report from Germelina Lacorte, Inquirer Mindanao 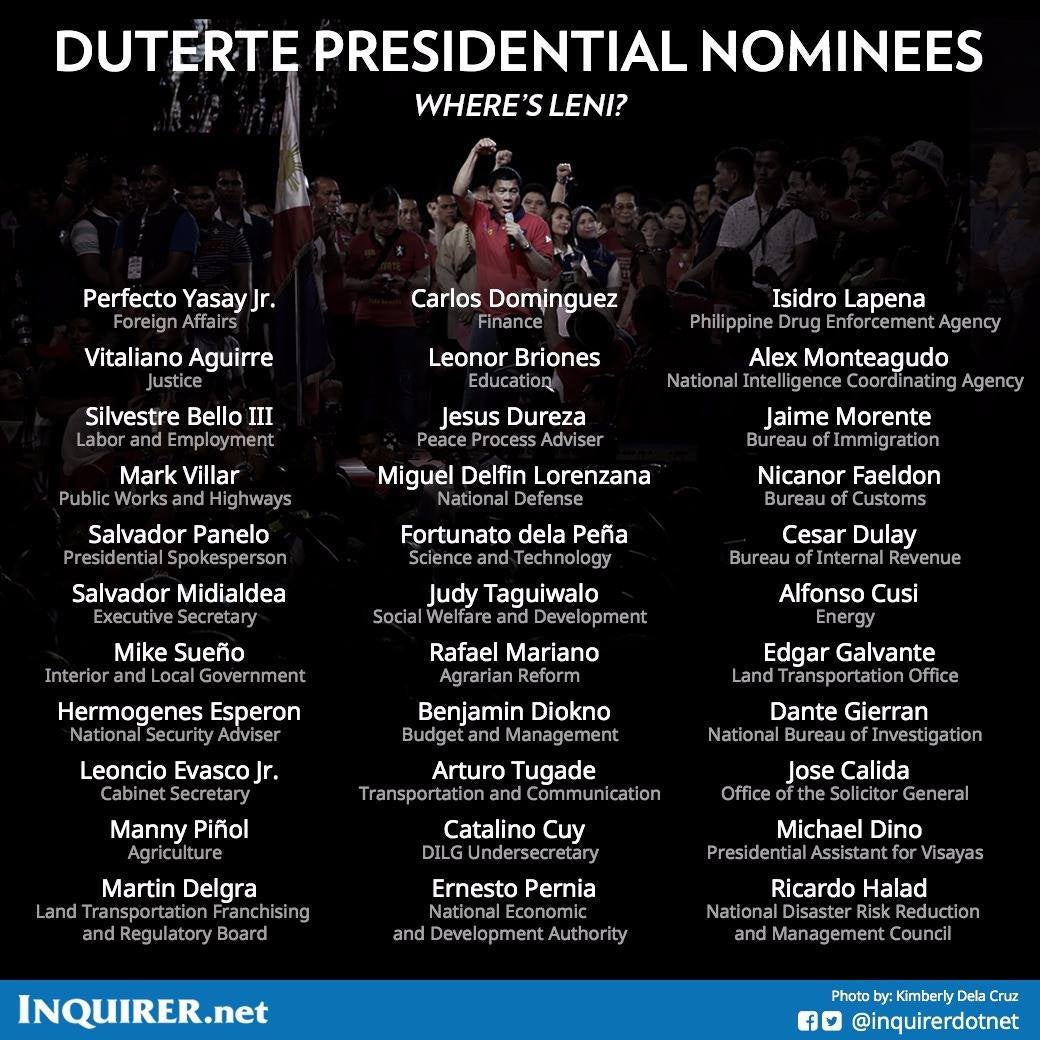