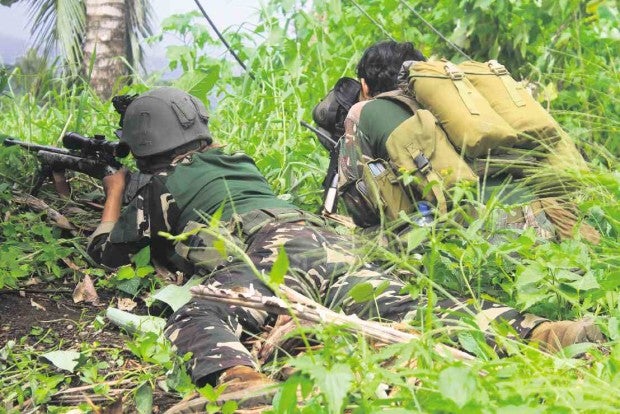 LOOKING FOR THE ENEMY An Army sniper sets his target at the Maute terror group’s lair more than a kilometer away from Ragayan Elementary School in Barangay Ragayan in Butig, Lanao del Sur province. RICHEL V. UMEL/INQUIRER MINDANAO

BUTIG, Lanao del Sur—Military field commanders have been ordered to pursue operations against members of an emerging terror group without let-up despite the dislocation of hundreds of villagers, and finish their mission possibly before the start of the Islamic holy month of Ramadan next week.

Maj. Gen. Gerardo Barrientos, Jr., commanding general of the Army’s 1st Infantry Division which has jurisdiction over this poor municipality, told the Inquirer that the situation was still fluid and that the military operations against the Maute group could still drag for days from Tuesday.

At least 54 members of the group were killed in the fighting that began on Thursday, military officials said on Monday, citing intelligence reports. Only 37 deaths have been confirmed, Barrientos said, adding that the military had their names.

Two soldiers were killed and nine were wounded.

Barrientos said his unit was bent on wiping out the terrorists, adding that their continued existence “has vital impact to the overall security in Mindanao.”

The Maute group has reportedly pledged allegiance to the Daesh or the Islamic State of Iraq and Syria (Isis) and is purportedly part of the Khilafah Islamiya Movement (KIM).

“As much as we could we wanted to conclude the military operations, the situation is very fluid and we wanted to cut and end the terror activities of the Maute group,” Barrientos said. He said he wanted to end the operations before the start of the fasting month of Ramadan on June 5 or 6.

“The military fully respects the upcoming religious celebration of Ramadan,” he said. But he added that the military would not think twice about enforcing the law beyond it until the Maute group had lost its capability to launch terror attacks.

Col. Roseller Murillo, commander of the Army’s 103rd Brigade, stressed that the Maute group posed a major security problem, even to civilians. For one, he said, it has extensive stocks of bombs, or improvised explosive devices (IEDs), 15 of which had been retrieved by soldiers under the 51st Infantry Battalion.

“The IEDs are ready to be deployed, which could create enormous damage to target communities,” Murillo said. One bomb could kills as many as 50 people, he said.

Lt. Col. Billy dela Rosa, the battalion commander, said four of the recovered bombs were fashioned from 105-millimeter howitzer shells while others were made from combinations of rocket-propelled grenade shells, hand grenades and rifle grenades.

Although he did not give an estimate of how many armed men were actually being hunted down, Lt. Col. Audie Mongao of the 15th IB said members of the Maute group were fighting soldiers because they were on drugs.

Mongao said government troops had found “shabu” and shabu paraphernalia in the course of their operations.

The fighting has so far displaced 1,200 residents from the villages of Ragayan, Poktan, Bayabao, Sandab, Coloyan and Samer, according to the Autonomous Region in Muslim Mindanao’s Humanitarian Emergency Action and Response Team. Most of them took shelter in the houses of their relatives in Masiu, Lumbayanague and Marawi City.

Drieza Lininding, vice chair of the Bangsamoro National Movement for Peace and Development, said he was hoping that “the needs of the IDPs (internally displaced persons) are being taken care of. We know how difficult it is to leave one’s house and livelihood.”

“Let us hope for a peaceful resolution. Personally, I don’t believe in military solutions as it only breeds more hatred and conflicts,” Lininding said.