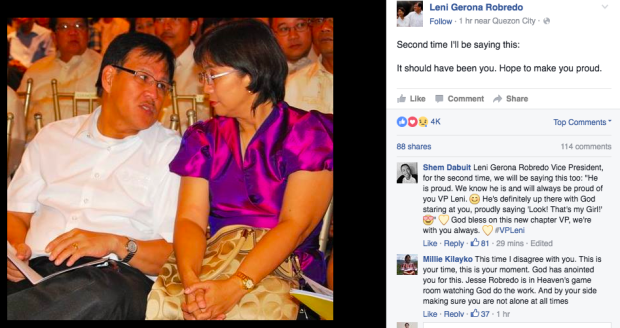 A day after she was officially proclaimed  the 14th vice president of the republic, Vice President-elect Maria Leonor “Leni” Robredo has a message to her husband, the late Interior Secretary Jesse Robredo.

In her Facebook account on Tuesday, Leni posted a photo of her with Jesse with the caption: “Second time I’ll be saying this: It should have been you. Hope to make you proud.”

The 51-year-old lawmaker from Camarines Sur was officially proclaimed on Monday at the House of Representatives with her daughters Jessica Marie, Janine Patricia, and Jillian Therese.

Congress finished its canvassing of votes last Friday, May 27, on Jesse’s 58th birthday. She described the timing as “meaningful.”

“If this is not providential, what do you call it?” she asked.

She won with 260,000 votes against her closest rival, Senator Ferdinand “Bongbong” Marcos Jr.

In a press conference after her proclamation, she said that being called “Vice President Leni Robredo” does not have any effect on her.

Robredo said that she is more interested in going beyond the vice president’s ceremonial duties by pushing for advocacies that she believes in.

(The way the title sounds has no effect on me. I am more interested in what I can do once I take office. I would like my office to be big on advocacy. I know it has its ceremonial functions, but I would like to concentrate on making it more meaningful, by focusing on policy and advocacies, considering that the office carries a big influence.)

Robredo will begin her six-year term as the country’s second woman vice president at noon of June 30. IDL/rga