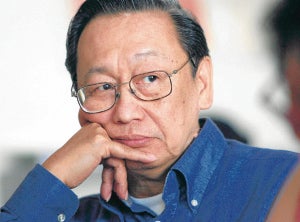 DAVAO CITY – Communist leader Jose Maria Sison has said attacks against government forces will continue for as long as President Aquino is in power.

“There is no reason to have peace with the rotten Aquino regime,” Sison said.

Suspected members of the New People’s Army (NPA) ambushed government forces in Negros Occidental on Saturday, killing at least one soldier with several others wounded.

Sison explained that the recent NPA attacks were meant to defend communities and their forces from continuing attacks by government forces.

The communist leader said that while incoming President Rodrigo Duterte has been offering peace and a solution to the conflict, Mr. Aquino has opted to pursue government attacks.

Human rights groups claimed that Oplan Bayanihan, the counterinsurgency program of Mr. Aquino, has led to  human rights abuses in the communities, including the deaths and massive displacements of indigenous peoples.

Sison said that in the absence of a ceasefire agreement, NPA offensives would continue.

“There is yet no peace agreement, not even an interim ceasefire agreement. We are still working hard to prepare the ground for formal peace talks. Duterte is not even seated yet,” Sison said.

Asked how fast the CPP could order the NPA to observe the ceasefire, Sison said the most crucial question right now would be to hasten the resumption of the formal talks and make an interim ceasefire agreement.

“It is pertinent to demand quick compliance only when there is already a ceasefire agreement,” Sison said.

Duterte said that the ongoing conflict has already caused too much damage not just to the military and the rebels but also to civilians.  The incoming President said he would offer a ceasefire upon assuming office.

Duterte is also planning to release all political prisoners, including communist leaders, either through pardon or general amnesty.  SFM/rga