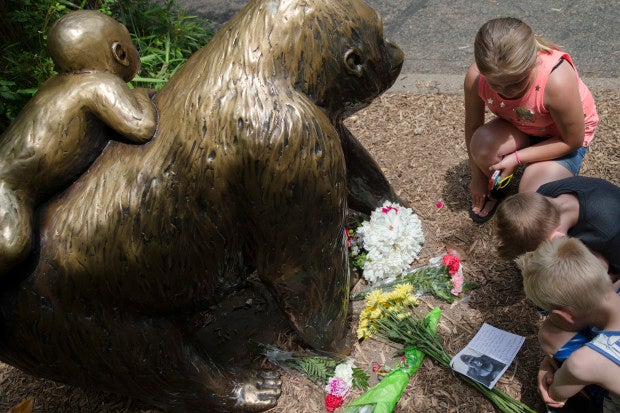 Children pause at the feet of a gorilla statue where flowers and a sympathy card have been placed, outside the Gorilla World exhibit at the Cincinnati Zoo & Botanical Garden, Sunday, May 29, 2016, in Cincinnati. On Saturday, a special zoo response team shot and killed Harambe, a 17-year-old gorilla, that grabbed and dragged a 4-year-old boy who fell into the gorilla exhibit moat. Authorities said the boy was expected to recover. He was taken to Cincinnati Children’s Hospital Medical Center. AP

CINCINNATI, United States — The Cincinnati Zoo’s director on Monday defended the decision to kill a gorilla to protect a 4-year-old boy who entered its exhibit, noting it’s easy to second-guess after the child was recovered safely.

The male western lowland gorilla named Harambe was killed Saturday by a special zoo response team that feared for the boy’s safety. Video taken by zoo visitors showed the gorilla at times appeared to be protective of the boy but also dragged him through the shallow moat.

READ: US zoo kills gorilla after boy falls into enclosure | Gorilla shot dead to save child

Director Thane Maynard said the gorilla was agitated and disoriented by the commotion during the 10 minutes after the boy fell. He said the gorilla could crush a coconut in one hand and there was no doubt that the boy’s life was in danger.

“We stand by our decision,” he said Monday, reiterating that using a tranquilizer on the 420-pound gorilla could have further threatened the boy because it wouldn’t have taken effect immediately.

Maynard said an investigation indicates the boy climbed over a 3-foot-tall railing, then walked through an area of bushes about 4 feet deep before plunging some 15 feet into the moat. The boy was treated at a hospital and released that same day.

The director said the zoo remains safe for its some 1.6 million annual visitors, but a review is underway for possible improvements.

Kim O’Connor, who witnessed the boy’s fall, told WLWT-TV that she heard the youngster say he wanted to get in the water with the gorillas. She said the boy’s mother was with several other young children and told him no.

Anthony Seta, an animal rights activist in Cincinnati, helped organize a vigil Monday just outside the zoo gates. He said the gathering wasn’t meant to assess blame but rather to honor Harambe, who turned 17 the day before he was shot.

In the days since, people have taken to social media to voice their outrage about the killing of a member of an endangered species. A Facebook page called “Justice for Harambe” was created along with online petitions and another page calling for a June 5 protest at the zoo.

Maynard said the zoo had received messages of support and condolences from around the world, including from other zoo directors and gorilla experts.  A spokesman for Jane Goodall, the famed primatologist, said she had “a private conversation” with Maynard, who said she expressed her sympathy.

Maynard said zoo visitors have been leaving flowers at the exhibit and asking how they could support gorilla conservation.

“This is very emotional and people have expressed different feelings,” Maynard said by email. “Not everyone shares the same opinion and that’s OK. But we all share the love for animals.”

The Gladys Porter Zoo in Brownsville, Texas, where Harambe spent most of his life, said Monday that its staff was deeply saddened by the gorilla’s death.

Harambe was sent to Cincinnati less than two years ago in hopes he would eventually breed with females there. Maynard said the zoo has some of Harambe’s sperm saved for research and possible future reproductive use.

Many social media commenters have criticized the boy’s parents and said they should be held accountable. A Cincinnati police spokesman said no charges were being considered. A spokeswoman for the family said Monday they had no plans to comment.

“I do think there’s a degree of responsibility they have to be held to,” said Kate Villanueva, a mother of two children from Erlanger, Kentucky, who started the “Justice for Harambe” page and attended Monday’s vigil. “You have to be watching your children at all times.”

Jack Hanna, host of “Jack Hanna’s Into the Wild,” said the zoo made the right call by shooting the gorilla. Hanna said he saw video of the gorilla jerking the boy through the water and knew what would happen if the animal wasn’t killed.

“I’ll bet my life on this, that child would not be here today,” Hanna told WBNS-TV.

The zoo said that it’s the first such spectator breach at Gorilla World since it opened in 1978. The director said expansion plans announced for the exhibit earlier this year would proceed as scheduled.

Gorilla World remained closed Monday, but Maynard said it could reopen next weekend.

The People for the Ethical Treatment of Animals released a statement from its primatologist Julia Gallucci saying the zoo should have had better barriers between humans and the gorillas.

“This tragedy is exactly why PETA urges families to stay away from any facility that displays animals as sideshows for humans to gawk at,” Gallucci said.