RODRIGO Duterte on Monday snubbed Congress, convened to officially proclaim him winner of the May 9 presidential election, closeting himself instead to wrap up chores as outgoing mayor of Davao City.

The nationally televised joint session of the Senate and House of Representatives declared the 71-year-old Duterte  the 16th President of the Philippines after receiving the results of the joint committee it had tasked last week with canvassing the results of the balloting in “record speed” of three weeks.

Congress, acting as the national board of canvassers, also proclaimed Rep. Leni Robredo of Camarines Sur province the  Vice President-elect to a rousing cheer from yellow-clad supporters.

She edged Sen. Ferdinand “Bongbong” Marcos Jr., by 263,473 votes in the highly charged race amid fraud charges and a determined campaign by President Aquino to stop the late dictator’s namesake son from occupying a seat a heartbeat away from the presidency.

Marcos’ campaign manager, Abakada Rep. Jonathan dela Cruz, in a speech, congratulated Robredo but announced the senator was pursuing charges that the Commission on Elections (Comelec) had failed to address widespread irregularities, including massive vote-buying and tampering by the Venezuela-based Smartmatic, which provided the electronic voting machines.

Without Duterte, Senate President Franklin Drilon and Speaker Feliciano Belmonte Jr. only had to raise the hands of Robredo in a gesture of victory. All three belong to the Liberal Party of the outgoing Aquino administration.

Breaking tradition, Duterte said at the weekend he had no plans of attending the elaborate ceremonies in Congress on Monday.

He said he had never attended proclamations as mayor of Davao City, which he led for two decades.

Duterte was represented by his lawyers—Salvador Panelo and Vitaliano Aguirre II.

The President-elect closeted himself in an undisclosed place in Davao City on Monday, according to his executive assistant, Christopher “Bong” Go.

“He is signing papers. He is in a private office,” Go said. “He was doing his chores as mayor.”

Duterte, who won largely on a campaign of introducing radical change after six years of Mr. Aquino’s perceived inept and insensitive administration, is due to be sworn in on June 30.

Duterte has announced appointments to his Cabinet and outlined plans to get rid of criminals and fix public transport paralysis.

Robredo—widow of the late Interior Secretary Jesse Robredo who died in a plane crash in 2012—had the spotlight all to herself in the jam-packed Batasan session hall.

It took Robredo more than 10 minutes to walk from the VIP section at the back end of the session hall to the rostrum where Drilon and Belmonte waited to raise her hands.

Robredo was mobbed by her allies and colleagues. She was gleaming with pride and relief of having won the race despite starting at the bottom of the field just months before the elections.

She stopped by St. Peter Parish along Commonwealth Avenue in Quezon City before proceeding to the proclamation.

Robredo, who wore a simple black dress with brown and white accents,  was accompanied by her three children—Aika, Tricia and Jillian.

Pat on the back

In his speech, Sen. Aquilino Pimentel III gave the joint canvassing board a pat on the back for an “efficient and expeditious canvassing of 167 COCS (certificates of canvass) at record speed of three days.”

In 2010, President Aquino and Vice President Jejomar Binay were proclaimed nearly a month after the balloting.

Duterte and Robredo were proclaimed at 4:10 p.m.—an hour after the joint session started. The event went smoothly despite protests in the hotly contested vice presidential race.

“Let there be no doubt while I strongly  disagree with the national board of canvassers count I accept it, we accept it. I accept the finality of the count which will now be ratified by the joint session. For the sake of our country, our unity as people and strength of our democracy,  I offer our congratulation and godspeed,” Dela Cruz said.

Marcos’ campaign adviser urged Duterte to blacklist Smartmatic whom he repeatedly referred to in his speech as “Smartmagic.”

Dela Cruz said the Marcos camp would pursue its electoral protest in another forum because “clearly, the system as we know it and as implemented in past three automated elections by the Comelec and its partner, a company now known as Smartmagic, has been shown to be vulnerable to external unauthorized rigging and manipulation.”

He listed issues the Comelec and the courts should address: vote-buying; the use of government funds to buy loyalty and votes; excessive campaign spending; the lack of testing and sealing of vote-counting machines prior to their deployment; a breakdown of how many machines broke down on Election Day; the change in transcript for a minor matter in the quick count server; the undervotes or uncounted votes; and the existence of rogue counting centers. 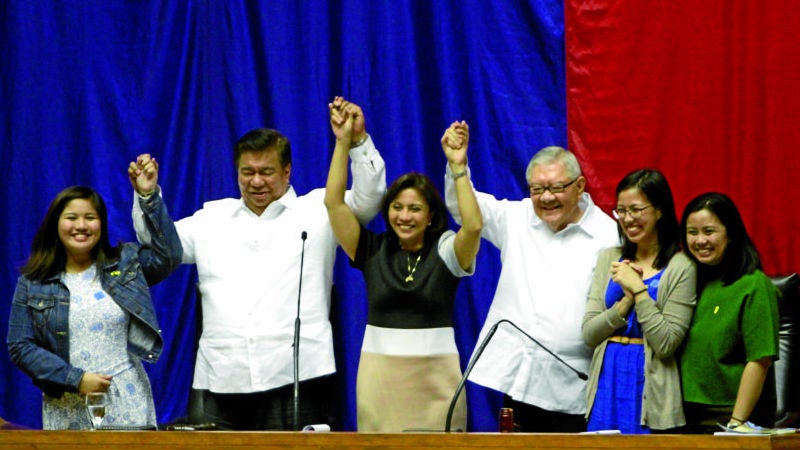 “Our people, not just those who voted, worked hard and cried with the Marcoses, want answers: honest, responsive, and credible answers to these and other questions,” Dela Cruz said.

Malacañang hailed the proclamation of Duterte and Robredo as “significant landmark.”

“We are celebrating the vitality of our democratic system  through the clear-cut expression of the popular will through the ballot. Let this be an augury of an even more auspicious future as the country builds upon the gains achieved through good governance and the determined efforts to ensure inclusive growth for all Filipinos,” Presidential Communications Secretary Herminio Coloma Jr. said in a statement.

“You had an impressive win in a hard fought race which is expected to bring change, a change that is great for the country. This will be a big win on our calls to institute genuine reforms and bring hope, peace, unity, and prosperity to the nation,” Romualdez said. With reports from Christine O. Avendaño and Nico Alconaba, Inquirer Mindanao