TAGUM CITY—Some 40 armed men believed to be communist rebels abducted the police chief of Governor Generoso town in Davao Oriental province in an attack on his police station on Sunday night.

Chief Insp. Arnold Ongachen, the police chief of the second-class municipality in the southern tip of the province, was taken from his quarters, during the offensive reportedly carried out by the New People’s Army (NPA).

Senior Supt. Harry Espela, provincial police chief, said policemen manning the station fought back, but were overwhelmed as they ran out of bullets. One of them, PO3 Johnray Cinco, was wounded.

The attack was the latest carried out by NPA rebels since Saturday, when they ambushed government troops in Negros Occidental province, leaving at least one soldier dead and several others wounded.

On Monday, Jose Maria Sison, founder of the Communist Party of the Philippines (CPP), said the offensives would continue as long as President Aquino is in power. The NPA is the party’s armed wing.

“There is no reason to have peace with the rotten Aquino regime,” Sison, chief political consultant of the CPP-led National Democratic Front of the Philippines (NDFP) said in a Facebook chat with the Inquirer. The CPP and NDFP find no reason now to make peace with the outgoing administration, he added.

Espela said the armed men, on board an Isuzu Elf and two pickup trucks, arrived at 8 p.m. and started firing at the police station in Governor Generoso. Aside from seizing the police chief, they also raided the station’s armory, taking an undetermined number of weapons, bullets and other valuables. 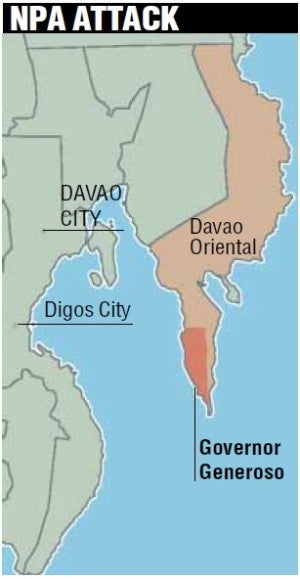 Espela said the vehicles used in the attack were recovered early Monday.

“There were fresh bloodstains in one of the vehicles so there could also be casualties among the attackers,” he said.

Batchar said a reinforcement group of policemen and soldiers had to be brought in by boat as the rebels had set up blockades and planted land mines along the national highway leading to Governor Generoso (also known as Sigaboy). The eastern coastal town is more than 50 kilometers from provincial capital of Mati.

Sison said the NPA offensives would continue because no ceasefire agreement has been in place. These were meant to defend local communities and rebel forces from attacks by government forces,” he said.

President-elect Rodrigo Duterte had earlier said the ongoing conflict had caused too much damage, not just for the military and the rebels but also to civilians. He said he would offer a ceasefire after he assumes office.

Duterte is also planning to release all political prisoners, including communist leaders, either through pardon or general amnesty.

“There is yet no peace agreement to end hostilities, not even an interim ceasefire yet. There is no reason to give any kind of parting gift to the dying Aquino regime,” Sison said.

Asked how fast the CPP can order the NPA to observe the ceasefire, he said the most crucial question was how to hasten the resumption of the formal talks and craft an interim ceasefire agreement.

“It is pertinent to demand quick compliance only when there is already a ceasefire agreement,” said Sison, who is living in exile in the Netherlands.

The CPP founder also told the Inquirer that he welcomed Duterte’s assurance that he would be safe when he returns home to join the peace talks.

Although he maintained that he is already covered and protected by Joint Agreement on Safety and Immunity Guarantees (Jasig), Sison said: “It is good to have a fresh presidential assurance of safe conduct because of gross violations of Jasig by the [Gloria Macapagal-] Arroyo and Aquino regimes.”

Under the Jasig, which was signed on Feb. 24, 1995, consultants and staff of the NDFP who are part of the negotiating team are granted immunity from arrest and detention. The agreement provides safety guarantees “to create a favorable atmosphere conducive to free discussion and free movement during the peace negotiations, and avert any incident that may jeopardize the peace negotiation.” With reports from Karlos Manlupig, Inquirer Mindanao, and Delfin T. Mallari Jr., Inquirer Southern Luzon